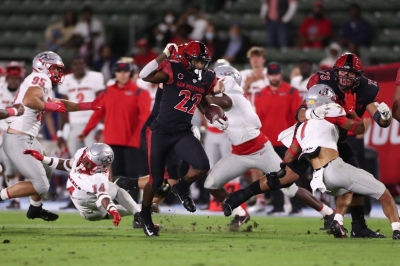 By Liz Alper
Photo courtesy goaztecs.com
October 9, 2021 (Carson, Calif.) - Aztec football opened Mountain West play today, hosting New Mexico.  The Aztecs are undefeated so far in non-conference play and looked to make a statement in conference play against a team who employs their old coach, Rocky Long, as defensive coordinator.
Nine minutes had barely gone by in the game when senior Greg Bell rushed for 63 yards for the first touchdown of the game.  SDSU led 7-0 after the extra point and one quarter.
The Aztecs opened up the second with scoring again as Rancho Bernardo alum Matt Araiza nailed a 40 yard field goal.  The red and black marched down the field later on and senior quarterback Jordan Brookshire punched it in from the one yard line and the Aztecs went to the half up big, 17-0.
The second half was mostly quiet, but the Lobos got themselves on the board after an Aztec fumble, the first third quarter points that SDSU has allowed this season, but Brookshire made up for it with a nice QB fake and took it in himself for his second rushing touchdown of the night and the Aztecs went up 24-7 after three.
The Aztecs started the fourth scoring again; senior runningback Chance Bell dove into the endzone just barely, it was ruled a touchdown after a challenge and the Aztecs remain undefeated as they beat New Mexico and Rocky Long 31-7 and move to 5-0.
UP NEXT
When high school football is in action next Friday, so will the Aztecs be in action in a Friday night showdown at San José State.  Kickoff is at 7:30 p.m.  You can watch the game on CBS Sports Network.
Box
Postgame notes
Postgame quotes