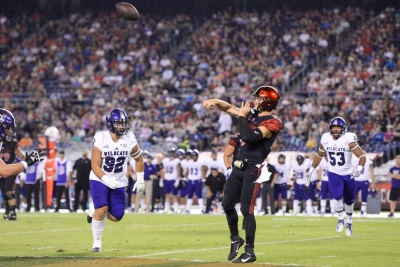 Story and photos by Cris Rangel

August 31, 2019 (San Diego) - SDSU kicked off their football season today against Weber State at SDCCU Stadium. Ryan Agnew debuted as the Aztecs quarterback against the Wildcats defense. The Aztecs tried to build momentum early, which only resulted in early turnovers. Weber State tried to pick up momentum and almost scored on a punt return with 4:25 left in the second quarter only to be brought back by a holding penalty on the offense. Before the beginning of halftime, the Aztecs led a charge past midfield and almost made it all the way to the end zone until falling short and had to settle for a field goal.

Early in the 4th quarter, the Aztecs went for a 4th and 1 desperate to get the touchdown and not lose the momentum from the crowd. Sadly, the Aztecs fell short and turned the ball over to Weber State. 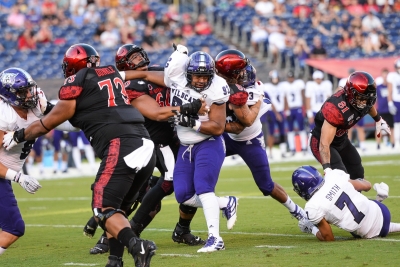 Ryan Angrew's first-time start resulted in 106 yards overall and a quarterback rating of 83.6.  Juwan Washington rushed for 55 yards with an average of 2.5 yards per play. Jese Matthews received 25 yards at the end of the game.
The Wildcats finished with only 154 total yards and total passing of 119 yards. SDSU finished with 238 total yards and 130 rushing yards. Next game is against UCLA on September 7th at 1:15 p.m.