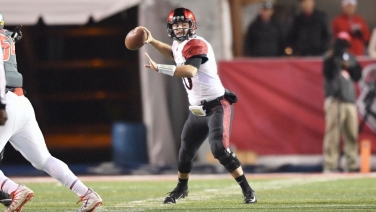 A John Baron II field goal with three minutes remaining put the Aztecs ahead for good at 24-23 with 2:56 to play.

But Aztecs quarterback Christian Chapman rallied his squad with a 75-yard scoring drive, and after the San Diego State defense held New Mexico, Garrett Binkley returned the punt 35 yards to the Lobos 41.

New Mexico was then called for its first penalty, roughing the passer, with 5:25 left, pushing the Aztecs to the Lobos 30. Three plays later, Baron hit the go-ahead 32-yard field goal.

Following a San Diego State interception, Washington went 50 yards for a touchdown to seal it.

The Lobos finished the first half with two complete passes, both of which went for negative yards. They didn't get into the positive yardage column until late in the third quarter and finished with 41 yards passing.

New Mexico's 10 first-half points, however, were the direct result of two fumble recoveries by Adebayo Soremekun, including one that he returned 44 yards for a touchdown. The Lobos also had a short field in the third quarter thanks to a third fumble recovery, leading to another touchdown.

The win keeps alive San Diego State's drive to reach win 10 wins for a fourth straight season, which would be a program record. Only six other schools have accomplished that feat, all from the Power 5 conferences.

New Mexico's loss means it needs to sweep its final three games to become bowl eligible for the third time in four seasons.

San Diego State is at home Nov. 10 to meet UNLV, which is in last place in the conference's West Division.