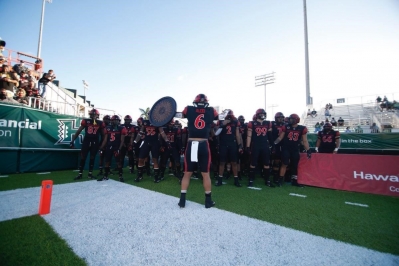 November 7, 2021 (Honolulu) -  Greg Bell and Jack Browning had first-half touchdown runs and the San Diego State defense made them stand up in a 17-10 victory over Hawaii in Mountain West Conference play on Saturday.

Bell scored on a 5-yard run to give San Diego State (8-1, 4-1) a 7-0 lead with 6:27 left in the first quarter. Hawaii (4-6, 1-4) pulled even after Darius Muasau sacked Aztecs quarterback Lucas Johnson, forcing a fumble that was recovered by Isaiah Tufaga at the Aztecs' 19-yard line. Chevan Cordeiro then hit Calvin Turner Jr. for the TD on first down to tie the game at 7. The Aztecs took the lead for good on Browning's 12-yard TD run, capping a 15-play, 82-yard drive with 9:43 left before halftime. Both teams managed only a field goal in the second half.