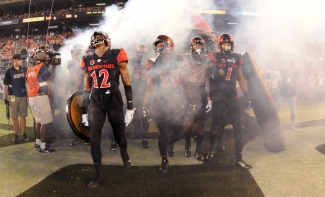 One of 17 teams nationally to play in a bowl game each of the last eight seasons (2010-17) and one of just two programs from a Group of 5 Conference to make eight straight bowl games, the Aztecs (6-1, 3-0 MW) are eligible to compete in nine bowl games, including the Chick-Fil-A Peach Bowl in Atlanta on Dec. 29 and the PlayStation Fiesta Bowl in Tempe, Ariz., on Jan. 1.

Below is a list of the eight bowl games in which SDSU is eligible to compete:

Receiving votes in the latest AP poll and the Amway Coaches Poll, San Diego State has won six consecutive games since falling in the opener at No. 13/13 Stanford. The Aztecs are one of just four teams to have at least a six-game winning streak in each of the last four seasons (2015-18) (also Alabama, Clemson and Ohio State).