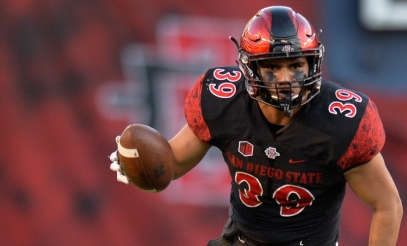 November 6, 2016 (Colorado Springs) - San Diego State has clinched the West Division crown of the Mountain West for the second straight year and a spot in the 2016 Mountain West Football Championship game, the league announced Sunday. The game is scheduled for Saturday, Dec. 3 and will kick off at either 4:30 p.m. PT, 4:45 p.m. PT or 5 p.m. PT on either ABC, ESPN or ESPN2.

The Aztecs (8-1, 5-0 MW) wrapped up the West Division title with a 55-0 win over Hawai’i yesterday and a Nevada loss at New Mexico. SDSU now has a three-game advantage in the West Division over second-place teams Hawai’i (3-3) and UNLV (2-3), and wins the tiebreaker advantage if the teams were to finish with identical 5-3 records.

Winners of five consecutive games, 16 straight against conference opponents and 18 of its last 19 contests, San Diego State travels to Nevada for a Saturday game, beginning at 7:30 p.m. PT.