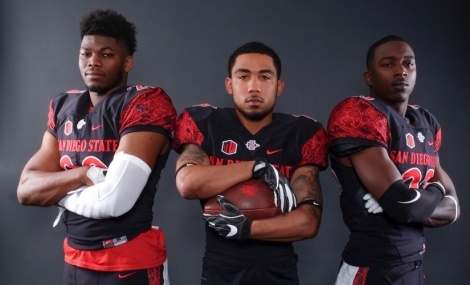 Pumphrey is the first running back in league history to win the offensive player-of-the-year award twice and is the fourth player overall, joining Derek Carr (2012-13 at Fresno State), Andy Dalton (2009-10 at TCU) and Bradlee Van Pelt (2002-03 at Colorado State).

Pumphrey, Kazee and Penny, who were each named the preseason players of the year as well, are joined on the all-conference first team by senior offensive guard Nico Siragusa (Chula Vista, Calif.), senior defensive end Alex Barrett (Mesa, Ariz.), senior linebacker Calvin Munson (St. Charles, Mo.) and sophomore kicker John Baron II (Temecula, Calif.). The seven first-team selections matched SDSU’s most in league history (also 2011 and 2015) and match the program’s most in any league since the 1974 squad put eight players on the PCAA First Team.

Pumphrey, the first San Diego State player to win two league offensive player-of-the-year awards in program history, has a school-record 1,908 rushing yards and 15 touchdowns on 305 carries (6.3 avg.), while adding a team-high 26 catches for 205 yards (7.9 avg.). One of four players in FBS to lead his team in rushing yards and catches, Pumphrey is ranked second in the country in rushing yards (1,908) and rushing yards per game (159.0), and third in all-purpose yards (2,119), despite not playing in the fourth quarter in four of the past six games. A finalist for the Doak Walker Award (top running back), and semifinalist for the Maxwell Award (college player of the year) and Walter Camp Player-of-the-Year award, Pumphrey had a streak of nine games with at least 100 rushing yards earlier this season, the second longest in school history and the longest in MW history. Pumphrey the first offensive player in MW history with three first-team honors (2014-16) and the third player overall (also Leon McFadden (2010-12) and Morrison (2002-04)).

Kazee, meanwhile, joins Morrison (2003-04) as the only multiple defensive player-of-the-year award winners in MW history. A three-time all-league pick over his career (also second team in 2014), Kazee has 54 tackles (39 solo), three tackles for loss, five interceptions for 112 yards (22.4 avg.) and a touchdown, six pass breakups and a quarterback hurry. He ranks second in the MW in both interceptions per game (0.42, 10th nationally) and 12th in interception yards (112, 12th nationally). Kazee, who was on the Bednarik Award (collegiate defensive player of the year) and Jim Thorpe Award (top defensive back) watch lists, also is seventh in the league in passes defended (INT + PBU) per game (0.92), while leading the team in tackles on passing plays (26). He has backed a defense that ranks seventh in rushing (113.33), 11th in total (318.25), 19th in scoring (20.75) and 20th in pass efficiency (114.96).

Penny, chosen as a PR/KR on the first team, is SDSU’s only special teams player of the year (also last year) and the only return specialist on the MW first team in league history (was also on the first team last year). On the season, Penny has returned 16 kicks for 462 yards (28.9 avg.), including two touchdowns (100 and 93 yards), while rushing 110 times for 878 yards (8.0 avg.) with nine touchdowns, and adding 12 catches for 207 yards (17.2 avg.) and another three scores. Penny, one of only 11 players in the country with at least nine rushing touchdowns and three receiving scores, and the only with two kick return TDs as well, ranks seventh in the nation (No. 1 in MW) in kick return average (28.8), despite being kicked away from most of the year. He’s also ranked first in the MW (No. 2 nationally) in kick return touchdowns (2), sixth in all-purpose yards per game (32nd nationally, 128.92) and total touchdowns (34th nationally, 14), eighth in rushing yards per game (73.17) and 10th in rushing touchdowns (71st nationally, 9).

Siragusa, the first San Diego State offensive lineman to be named a first-team all-MW selection twice in league history, has started all 12 games at left guard, ranking as the fifth-best guard by Pro Football Focus and the third-best run blocker. Additionally he is the highest-rated offensive lineman on an Aztec unit that has produced 14 100-yard rushing games by three different backs this year. Siragusa has helped SDSU rush for a school-record 3,311 yards with still two games to go. He has not allowed a sack or a quarterback hit in 778 snaps on the season.

Barrett, the first Aztec defensive lineman to earn first-team all-MW honors multiple times, has 47 tackles (25 solo), and team highs of 6.5 sacks, 11 tackles for loss and 14 quarterback hurries, along with four pass breakups in 12 starts. Barrett, who also was an honorable-mention all-MW pick as a sophomore in 2014, is ranked fourth in the MW in sacks per game (0.54) and sixth in tackles for loss per game (0.92). In the 18-year history of the league (since 1999), only two other SDSU defensive linemen have earned first-team all-league honors (Antwan Applewhite in 2006 and Kabeer Gbaja-Biamila in 1999).

Like Barrett, Munson improved from honorable mention in 2014 to first-team all-MW each of the past two years. On the season, Munson has a team-high 99 tackles, 41 more than the next player on the team. His 99 tackles are tied with Nat Berhe (2013) for the most in the Rocky Long defensive coordinator era (since 2009) and he still has two games remaining. He also has 13 quarterback hurries, to go along with 9.0 tackles for loss, 2.5 sacks and three pass breakups. Among the league leaders, Munson ranks ninth in the MW (68th nationally) in tackles per game (8.25). Munson is the third Aztec linebacker in the MW era to be named a first-team all-conference selection multiple times (also Miles Burris in 2010-11 and Morrison in 2002-04). He was a quarterfinalist for the Lott IMPACT Trophy and on the watch list, and on the watch list for the Nagurski Award (national defensive player of the year) and the Butkus Award (top linebacker).

Arguably the best blocking tight end in the league, Wells earned his first all-conference honor by being named a second-team selection. He has started all 12 games at tight end, recording 20 catches for 254 yards (12.7 avg.) and four touchdowns. According to Pro Football Focus, Wells is rated as the sixth-best tight end and the sixth-best run blocker.

Brunskill also earned second-team honors at offensive right tackle after being named an honorable-mention pick as a tight end last year. Brunskill has blocked for a team that has produced 14 100-yard rushing games by three different backs this year and a school-record 3,311 yards with still two games to go. According to Pro Football Focus, he is rated as the 12th-best tackle and the fourth-best run blocker. Brunskill has also allowed just one sack in 781 snaps on the year.

Smith garnered second-team accolades after being an honorable-mention selection each of the past two seasons (2014-15). On the year, he has 50 tackles (28 solo), including two tackles for loss, a 28-yard interception for a touchdown and six pass breakups.

Kelley picked up honorable-mention accolades in his first season as a starter. On the year, Kelley has 34 tackles (15 solo), including 4.5 tackles for loss, three sacks for 19 yards and 11 quarterback hurries in 12 starts on the season.

Tickets for the MW Football Championship are available in the SDSU Aztec section online through GoAztecs.com, or by visiting Qualcomm Stadium’s Window E between 9 a.m. PT and 5 p.m. PT or over the phone by calling (619) 283-7378.