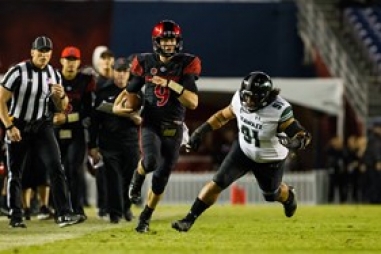 With the setback, the Aztecs (7-5, 4-4 Mountain West) lost their third straight and saw their six-game winning streak vs. the Rainbow Warriors come to a halt.

SDSU found itself trailing 31-24 after Hawai'i (8-5, 5-3 MW) scored the first touchdown in the extra session on a 10-yard pass from Cole McDonald to JoJo Ward; however, the Aztecs quickly answered on the first play of their ensuing possession when Juwan Washington burst through a swarm of would-be tacklers on a 25-yard dash into the end zone.

With momentum on its side, San Diego State went for the two-point conversion to try and escape with the victory, but Ryan Agnew’s pass to Kahale Warring sailed high and incomplete.

Earlier, the Aztecs had a chance to win in regulation, but John Baron's 32-yard field goal attempt with three seconds left on the clock curled wide right. SDSU marched 65 yards in 10 plays to set up the potential game-winning kick, with Washington gaining 29 of those yards on six carries. Agnew, who relieved starter Christian Chapman on the second drive of the fourth quarter, also came through in the clutch with a key 15-yard scramble on a 3rd-and-1 play.

Washington matched his season-high with 158 yards on 31 carries for two touchdowns, helping the Aztecs outgain the Rainbow Warriors on the ground 224-64.

Despite allowing 452 passing yards, SDSU erased a 24-14 halftime deficit by keeping Hawai'i off the scoreboard in the third and fourth quarters.

The Aztecs trimmed the deficit to 24-17 on their first series of the second half when Baron connected on a 53-yard field goal with 10:29 remaining in the third quarter. The Scarlet and Black rode the arm of Chapman, as the senior signal-caller completed an 11-yard pass to Warring followed by a 10-yard strike to Tim Wilson Jr. shortly thereafter.

Following an exchange of punts, Hawai'i was poised to increase its advantage after reaching the SDSU 15 late in the period. However, Tariq Thompson promptly extinguished the threat with a recovery of a Miles Reed fumble.

The two sides traded punts once again before the Aztecs embarked on a 10-play, 68-yard march, capped by a 13-yard touchdown pass from Agnew to Isaac Lessard on a 4th-and-1 situation, which knotted the score at 24-24 with 6:07 left in the fourth quarter. Washington helped key the drive with a 20-yard jaunt down the left sideline after Agnew rolled out for 14 yards himself on the previous play.

Hawai'i drew first blood in the first quarter on Ryan Meskell's 22-yard field goal; however, SDSU responded on its first play of the ensuing possession when Chapman hit Fred Trevillion in stride for a 76-yard touchdown strike.

Later in the period, the Aztecs capitalized on a Warrior miscue when Dwayne Johnson Jr. scooped up Justice Augafa's fumbled punt and returned it 20 yards to the Hawai'i 5. On the first play after the turnover, Washington barreled into the end zone, putting SDSU in front 14-3 with 5:20 left in the quarter.

Stung, the Rainbow Warriors rang up 21 unanswered points in the second quarter to take a 24-14 lead into the locker room.

After McDonald connected with Elijah Dale for a 2-yard touchdown pass, which narrowed the gap to 14-10, the Aztecs had a chance to extend their lead, but Chapman was thrown for a one-yard loss on a 4th-and-1 from the Hawai'i 4.

Buoyed by their good fortune, the Rainbow Warriors drove 95 yard in seven plays, punctuated by McDonald's touchdown run from a yard out on a quarterback keeper to put the visitors on top 17-14.

Hawai'i quickly forced a three-and-out and then struck again in just five plays, with McDonald hitting Cedric Byrd in the left corner of the end zone to give the Warriors a 10-point cushion.

McDonald completed 29 of 46 passes for 452 yards and three scores, while Marcus Armstrong-Brown led all players with seven catches for 86 yards. Byrd (140 yards) and Ward (120 yards) each topped the century mark in receiving yards with six grabs each.

Defensively, the Aztecs were led by Kyahva Tenzino and Parker Baldwin, who finished with seven solo tackles apiece, while Noble Hall had six stops (five solo) of his own.