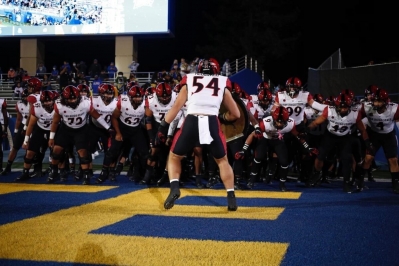 By Liz Alper
Photo courtesy goaztecs.com
October 16, 2021 (Carson, Calif.) - ECM Sports doesn’t have high school football tonight, but we have some college ball as the Aztecs traveled up to San José for an old-fashioned Friday night showdown against the San José State Spartans.

The first quarter was quiet, but in the second, Rancho Bernardo alum and junior Matt Araiza nailed a long 53-yard field goal attempt to give the Aztecs the lead.  But it didn’t last long as his counterpart, junior Matt Mercurio, completed a field goal of his own.  Araiza countered with a minute left in the half with his second field goal of the night and the Aztecs led 6-3 at the half.

The third quarter was again uneventful, but Mercurio tied the game with--you guessed it--a field goal in the fourth.  Luckily, Mercurio’s next 52-yard attempt was wide right and we were headed to overtime.
Salvation came on the first drive of OT when senior quarterback Jordon Brookshire fired a long airball to junior and Christian High alum Jesse Matthews, finding him in the endzone for the first touchdown of the game.  But the Spartans fought back and after a great catch downfield by grad student Derrick Deese Jr., senior Tyler Nevens bulldozed his way into the endzone for six that turned into seven with the extra point and we were headed to double overtime.
In double OT, after an interception by senior safety Trenton Thompson, senior Lucas Johnson came off the bench and fired a beautiful ball to Matthews, who caught it as he fell to the ground in the blue and yellow rectangle and SDSU remains undefeated both in overall and Mountain West play with a 19-6 win.
UP NEXT
The Aztecs are back to Saturdays next week, continuing their road trip at Air Force.  Kickoff is set for 5 p.m. MT/4 p.m. PT and will be broadcast on CBS Sports Network.
Box
Postgame notes

Must have been fun to watch. How long was it Liz? Double OT? In Football I guess two quarters so 30 minutes plus non game play? Nice. Oh San Jose I see so our locals missed out what a shame it'll be great to have our very own Aztec Stadium soon.