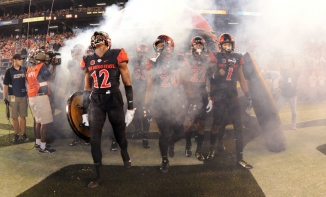 Long spoke on whether any true freshmen would be playing this week. "We’re going to take five true freshmen on the trip with us. We don’t have any plans on putting them in the game right now... I’m sure that some freshmen will play this year that wouldn’t have played in the past, but right now they’re down on the depth chart, so we don’t count on playing this week. But if we had a couple of guys get hurt, there could be a freshman or two put in there.”

A big problem for the Aztecs defense is Stanford running back Bryce Love.  Long talked about him for a bit. “I thought Bryce Love was as good a running back as there was in the country last year. I don’t know how much better he can get. You know, we’re walking into a tough situation. Not only do they have him, they have a bunch of experienced players back and they’re good football players. David Shaw’s a great coach and he’s got a real good coaching staff. There’s a reason they’re ranked 13th in the country. It’s not because they’re not any good. It’s because they have a really good football team coming back with experience and good coaching. That’s why they’re picked 13th and they should be picked 13th.

“I’ve been lucky over the last couple of years to watch a bunch of good running backs and all of them have a little different athletic ability that the used to the maximum. They all have great vision, they all understand the defense because they all understand where the place is supposed to go to but they know who to look at that prevents the play from going that way, so they take it somewhere else. When they find a seam or a hole, they accelerate through it and then once they get into the open field, they can make a one-on-one tackler miss every time. So I’ve been lucky the last four or five years. I’ve watched a whole bunch of great running backs and he’s a great running back. He has all those qualities.”

So how do you contain him?  "You want the truth, right? You do not. You put your guys in as good a position as you can put them in, so that you’re not outnumbered and then your guys have to play well. When you have an outstanding athlete in a position, he will win most one-onone situations... You cannot take a great running back away. There’s no way to defend a great running back other than not being out-numbered or out-positioned in the blocking scheme. We will not be out-positioned or out-numbered on the blocking scheme. Whether we can tackle him or not, that is up for question. So there is no legitimate way to stop a great running back other than your line of scrimmage is better than their line of scrimmage.”

Last year, Stanford lost to SDSU in the first game of the season.  Will they be out for blood?  Long says no. “I don’t think you develop a rivalry in two games. I don’t know what coach Shaw’s opinion of that is, but my opinion is there’s no such thing as revenge in athletics. They’ve got a great football team and we’re going to come in and we’re going to play as hard as we can play. And after the first snap if you had that factor as a motivation, it is over in football because you run into each other. Once you violently run into each other, all of that stuff is out the window.”

Hall talked about the difficulties his defensive line faces in Stanford's huge offensive line. “It’s going to be a battle for us, but I feel like we’ve been doing the right things to get ourselves prepared for that technique. I feel like we have a good scheme on defense, so I think we’ll be able to handle it pretty well..."

Houston says it's good to feel nervous before a game. “I feel like if you don’t have butterflies, something is wrong. I get butterflies before every game no matter who we’re playing, no matter what game it is. But as soon as that first hit, that first kickoff, first kick return it’s go time."

Now a junior, Houston spoke on leading the Aztecs. “Two guys that have been here, David Wells and Nick Bawden, were two huge leaders that we lost and they seemed to always bring something to practice every day, so I’m trying to replace that, bring the juice, bring the energy every day. You feel a little more comfortable because we’ve always been the best in our high schools and you just kind of get back into that role where you’re the leader again. You’ve got to do what’s right, you just got to show what’s right and go out there and play.”

The Aztecs take on Stanford on Friday night at 7:00 p.m. at Stanford.