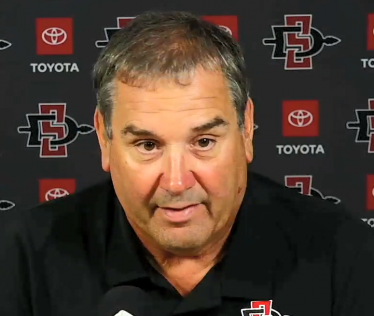 First off, Hoke addressed the sexual assault allegations on five Aztecs football players that occurred in October of 2021.  Hoke said that he cannot answer any questions at this time, but that SDSU football is cooperating and assisting the investigation in any way that they can.

The Aztecs announced former SDSU great Donnell Pumphrey as a graduate assistant coach.  Hoke says that he's gotten to know Pumphrey and his experience will make a difference on the staff.

Hoke was firm that the Aztecs deserve to be in the polls, such as the AP Top 25, because they have shown that they can compete with the best and they have.  "Coaches need to vote for the Mountain West teams," he said.

I asked Coach about the fact that since Mountain West games are played at night, if that affects the polls at all since East coast journalists and coaches aren't awake to see the games.  He said that his 91-year-old mother and father-in-law will stay up in Ohio to watch the games, so coaches need to stay up and vote.  "They have an interest in the game," he said. "does it affect people not seeing you play?  Sure.  Especially those who vote...so I don't want to call it a problem, but it's part of the problem."

The Aztecs' first game at Snapdragon Stadium is on September 3rd against Arizona.