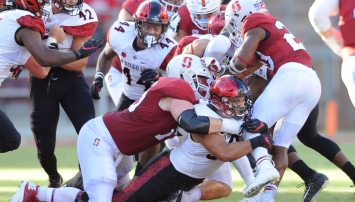 “Well, it’s another week," Long opened with simply.  " I hope everybody that is interested realizes how good they (Sacramento State) are. They’re a very talented explosive football team that last year and the first game this year has shown they can play the game really, really well...So our boys better be ready to play because it will be a very competitive football game.”

Long discussed what he learned from his new team after the first game. “I don’t think we played as well as we expected to play. I thought we would play better. On the positive side, I thought that we played better at the line of scrimmage than I thought we would. I thought we would be a little outmanned on the defensive line by their offensive line and a little outmanned on our offensive line by their defensive line, and that was not the case. We held our own and sometimes we were the better line of scrimmage. But we made way too many mistakes on both sides of the ball. Then we had a little trouble covering one of their receivers.”  Long also said he thought they were a "very physical football team."

As he mentioned in his intro, Long is really driving home the point of how good a team Sacramento State is. “It’s not difficult to communicate it to them at all. It’s already been communicated many, many times and will be for the next three days, too. It’s whether they’re listening and understanding, that is the problem..."

Long discussed how to change the defense between last week and this week. “There are a lot of things that you could do and bunch of them that we’re not going to do...So we’re going to play our defense the best way we can play our defense and hope that the defensive backs make more plays than they did last week.”

The Aztecs are home this week.  Long talked about starting at home vs. being on the road. “I don’t have any trouble getting fired up for every game. I think most of the time, but not always, you play better at home because your team is more comfortable. The routines are pretty much the same every time you play at home as opposed to every road routine ends up being different. I think it’s natural that an athlete performs he has friends and family watching him. I think that makes most athletes perform at a better rate, so it’s always better to be at home.  And it’s nice that this is our first home game.”

Pope was a bit more excited. “It’s high. Every week, we get a new chance to go out and demonstrate just how hard we worked in this offseason, and just impose our will on our opponents.”

Pope talked about his offensive line on Friday night.  “We made some holes. It’s never good enough, but the physicality was there. It was just the little things. It was more so assignments and little things like that. The physicality of the game, we dominated them. I agree.

"Consistency is for sure something that needs to be worked on. It’s being changed in practice as we speak.”

He also talked about what the line could do to improve the pass block.  “I would say hands for sure. Getting our feet in front of the rush and just knowing our leverages, our land marks. Knowing how deep the quarterback is on every play we have. It’s the little things. It’s strictly technique; it’s nothing wrong with the physical. It’s just technique and just knowing where he is and just keeping him as clean as possible.”

Luke was confident in the team's spirit, however. “We don’t like to think about the names of schools we play. Each game is its own game. No matter who we go into the game against, we don’t care about number 13th-ranked in the nation Stanford, this year or last year—it’s just another game to us. This game coming up is going to be the same thing. It’s just another game to us. We don’t care who they are. It’s their lineup against us. We’re going to have the same confidence. We didn’t lose any confidence from last week. I actually think the defense is actually more pumped. We came out at practice yesterday with a lot of fire. We had a great practice yesterday. We are pretty pumped.”

SDSU Director of Athletics John David Wicker also made an appearance and talked about the public's vision for the new Mission Valley stadium.  “We’ve been very intentional in talking, obviously, about SDSU Mission Valley. Our vision for the property, once we get the opportunity to purchase it for fair market value from the city, and that it’s more than the stadium. It’s a river park that is great for the Mission Valley community, but it’s going to be something that the entire San Diego community can use. The opportunity to expand campus over time. We will begin our buildout of that area immediately, and there will be some pieces of campus that will go down. This is a 120-year plan we’re looking at—SDSU is actually at 121 years, so a 121-year plan. Addressing the residential needs. 4,600 residential units that will not only be market rate, but we’re also looking, we’re going to build on-site affordable. We’re going to have housing for upper division and graduate students, which right now, with our new sophomore live-on requirement, we’re struggling to find housing for those students that want to live on campus beyond their sophomore
year. Then we’ll look at it as an opportunity to help attract the faculty and staff we want to bring to San Diego as we look to increase—I think last year, we had $135 million in research monies that we generated through grants and other—and we want to increase that. We want to be a top-50 research institution and that will be something that will happen in Mission Valley over time as well. Last, but certainly important to me, a 35,000-seat stadium that’s a community-minded stadium. It’s great for Aztec football, but it’s going to work for soccer, whether that’s an international or domestic league. It’s going to be great for concerts, dirt shows, all the other different events you might see there.”

SDSU football takes on Sacramento State Saturday at 6:00 p.m.  The KGB SkyShow will also be after the game.