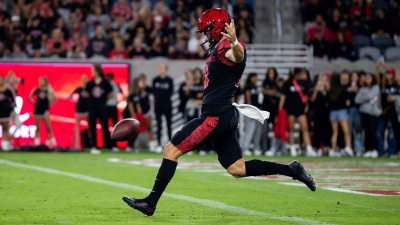 November 29, 2022 (San Diego) - San Diego State football’s Jack Browning has been named the Mountain West Special Teams Player of the Year, the league announced Tuesday. An Aztec has now won the award five times (all over the last eight years), the most in the 24-year history of MW.

For a fourth straight year, SDSU had the most first-team all-MW selections with seven, three more than Fresno State and San Jose State’s four. San Diego State also had the most combined first and second teamers (11 (FS was second with 8)) and the most all-conference selections overall (16). The 16 all-league selections for the Aztecs tied a program best (also 2001).

Making the first team were offensive lineman Alama Uluave, Jordan Byrd at both kick and punt returner, defensive lineman Jonah Tavai, linebacker Caden McDonald, safety Patrick McMorris and Browning at punter.
On the second team for SDSU were wide receiver Tyrell Shavers, tight end Mark Redman, offensive lineman Cade Bennett and linebacker and Helix alum Michael Shawcroft.
San Diego State also had five honorable mentions, including quarterback Jalen Mayden, wide receiver and Christian High alum Jesse Matthews, defensive lineman Keshawn Banks, and cornerbacks Dez Malone and Dallas Branch.
The all-conference awards are voted on by the league’s 12 head coaches and various media members from the league.
Handling all three kicking duties, Browning has made 17 of his 21 field goal attempts and all 28 PATs, leading the Aztecs with 79 points, more than the next three players combined. Browning has also punted 63 times for 2,898 yards (46.0 avg.) with a net average of 42.7 and a long of 63 yards. Out of his 63 punts, 28 have landed inside the 20-yard line, including 14 inside the 10 and six inside the 5. Browning also has kicked off 53 times for 3,394 yards (64.0 avg.) with 31 touchbacks.
According to Pro Football Focus, Browning has the best punt grade (87.2) in the country. Browning, who ranks third in SDSU single-season history in punt average (46.00), seventh in field goal percentage (80.95) and tied for seventh in field goals (17), is tied for the FBS lead in PAT percentage (100.00), and is tied for fourth in punts inside the 20-yard line (28, 1st in MW), sixth in net punt average (42.67, 1st in MW), eighth in punt average (46.00, 1st in MW), tied for 11th in kickoff average (64.04, 1st in MW), and tied for 24th in field goals per game (1.42, 4th in MW) and made field goals (17, T-3rd in MW).
Shawcroft was picked as a second-team honoree after earning honorable mention accolades a year ago. Shawcroft earned second-team honors despite leading the team with 77 tackles, 18 more than No. 2 on the team. He also has 12 tackles for loss, 5.5 sacks, three pass breakups, a forced fumble and six quarterback hurries, despite missing a game due to injury. Shawcroft ranks in a tie for sixth in the MW in tackles for loss per game (1.09, T-39th in FBS), a tie for eighth in total tackles for loss (12.0, T-56th in FBS), and a tie for 10th in tackle for loss yards (53, T-68th in FBS) and sacks per game (0.50).
Matthews made his first all-MW team after being named a preseason all-conference pick. On the year, Matthews has a team-high 38 catches for 409 yards (10.8 avg.) with three touchdowns and a long catch of 28 yards. Matthews, who had a touchdown catch in three straight games in November, enters the Hawai`i Bowl ranked eighth in school history in receptions (167), 14th in receiving yards (2,010) and tied for 14th in receiving touchdowns (15).
San Diego State (7-5) will play Middle Tennessee (7-5) in the 2022 EasyPost Hawai`i Bowl on Saturday, Dec. 24 at 3 p.m. HST (5 p.m. PST). The Aztecs are in a bowl game for the 12th time in the last 13 seasons after withdrawing from consideration in the shortened 2020 COVID season.