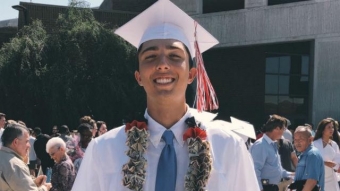 November 12, 2019 (San Diego) – A student hospitalized the morning after a fraternity party has died, prompting a police investigation and shutdown of 14 fraternities.

Dylan Hernandez, 19, was found by his roommate in his dorm room on Montezuma Road without a pulse and not breathing on the morning of Nov. 7. He had reportedly fallen out of his upper bunk bed earlier during the night and his roommate helped him back into the bed.. He was taken to Alvarado Hospital and pronounced dead on Nov. 8, the Medical Examiner reports. He had attended  a fraternity party the night before.

Cause of death has been found to be blunt force head trauma, according to the Medical Examiner. It is not yet determined whether alcohol was a factor.  The University Police Dept. indicates it is taking the investigation “very seriously.”

SDSU President Adela de la Torre issued a statement indicating the family “gave their goodbyes late Sunday night,” adding.”  “As a mother, nothing can replace the profound loss of a child, and the devastating heartbreak the family and their loved ones are experiencing.”

The university suspended all activities by the 14 fraternities that make up its Interfraternity Council on Friday after Hernandez was hospitalized.

The suspension affects more than 1,400 members of the 14 council fraternities, but does not affect the National Pan-Hellenic Council, the College Panhellenic Association or the United Sorority and Fraternity Council or the chapters affiliated with those organizations.

Hernandez, who was from Florida, lived at the Tenochca residence hall had been pledging Phi Gamma Delta, also known as “Fiji,” according to The Daily Aztec. Phi Gamma Delta was placed on probation in 2017 “after being found in violation of regulations pertaining to alcohol at off-campus fraternity events,” the student newspaper reported.

SDSU has set up a webpage that is being updated as more information becomes available on the case.

According to the page, an SDSU fraternity is alleged to have been involved in possible misconduct on Wednesday, November 6. The incident, involving a university student, was reported to law enforcement on Thursday, November 7.

This means that a total of 10 of the 14 IFC-affiliated organizations were under some level of elevated judicial status prior to this incident.  The week’s incident would mark the 11th organization to be on interim suspension or under investigation. This factored into President de la Torre’s decision.

For a recognized student organization to be assigned “interim suspension or sanction” status, as outlined in the Student Organization Handbook, the Vice President for Student Affairs, or a designee, has determined that there is a perceived concern for the health and safety of a member or members of the campus community and the incident is under review.

A friend of the Hernandez family created a fundraising campaign on GoFundMe Monday to support the family. More than $27,000 has been raised as of Tuesday morning—far more than the $1,000 goal.