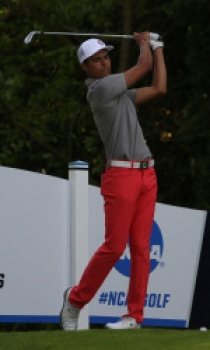 Aztecs drop into tie for sixth as a team

Photo:  Nahum Mendoza III was the Aztecs' No. 1 finisher at The Prestige at PGA WEST where he tied for third at four under.  Courtesy goaztecs.com

As a team, the Aztecs shot a combined 7-over 291, slipping three places into a tie for sixth with a 54-hole total of 10-over 862 on the par-71, 7,065-yard Greg Norman Course. SDSU began the day knotted for third, but was unable to keep pace with the leaders after counting just four birdies on the front nine.

Along with Iowa State, the Aztecs completed the tournament 10 shots in back of LSU (E), which successfully defended its team title from a year ago, while Pepperdine (+4) jumped five places into the runner-up position on the strength of a final-round 279, followed by Oklahoma (+6), Texas Tech (+9) and Stanford (+9).

For the third time this year, Mendoza finished as SDSU’s No. 1 golfer, landing in a three-way tie for third at 4-under 209, along with Quade Cummins of Oklahoma and Sandy Scott, an individual competitor from Texas Tech.

Mendoza, who tied for second in the field with 39 pars for the week, recorded 15 alone on Wednesday to go along with a pair of birdies. Among the highlights for the reigning Mountain West Player of the Year was an impressive drain on the par-4, 481-yard No. 6, which ranked as the toughest hole of the tournament. However, an untimely double-bogey on the par-5 16th knocked him out of a potential second-place standing.

Despite the hiccup, Mendoza still managed his second top-five placement of the year and eighth as a collegian, finishing five strokes behind medalist Jared duToit of Arizona State (-9), while Sam Burns of LSU (-5) leaped into second, thanks to a final-round 67.

PJ Samiere (Kailua, Hawaii) was the only other Aztec golfer to finish among the top 20 for the week, tying for 14th at even-par 213 after carding a 72 on Wednesday. The SDSU junior opened with birdies at No. 1 and No. 4, but three bogeys over his next five holes proved too much to overcome. Despite seven pars and an additional birdie at No. 11 on the back nine, Samiere still slipped four places on the leaderboard.

Conversely, Blake Abercrombie (Rocklin, Calif.) made a modest gain over the final 18 holes, jumping two spots into 22nd at 2-over 215 after matching Mendoza with a 71. The Aztec junior offset back-to-back bogeys at No. 13-14 with a pair of birdies, including a successful conversion on the par-3, 180-yard 17th, while collecting 14 pars on the afternoon.

Meanwhile, Brian Song (Beverly Hills, Calif.) dropped 13 places into a tie for 52nd with a combined 12-over 225 after carding a final-round 77. The SDSU senior reeled off six straight pars after making birdie on the first green. Despite adding two more birdies on the back nine, however, Song’s day was largely undone by consecutive triple-bogeys on the par-4 No. 9 and No. 10.

Elsewhere, Pablo Matesanz (Irun, Spain) sank a birdie on the par-3, 181-yard No. 7, which ranked as the second-most difficult hole of the final round. However, the Aztec junior was plagued by three bogeys, two triples and a double before settling for an 81. Despite closing with four straight pars, Matesanz was unable to avoid a tumble of 11 places into the 73rd position at 19-over 232.

SDSU was also represented by sophomore Otto Vanhatalo (Espoo, Finland), an individual participant who dropped into a tie for 49th at 11-over 224 on the heels of a 77. The Torrey Pines High alumnus struggled for most of the day before salvaging a birdie on his finishing hole, the par-4 No. 9.

San Diego State will return to the fairways next week when it participates in the Southwestern Invitational, Feb. 27-28, at North Ranch Country Club in Westlake Village, Calif.

The Prestige at PGA WEST