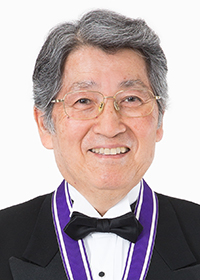 Mimura’s lecture, “My 50 Years with the Transistor,” will take place from 10-11:30 a.m. on Wednesday, March 21 in the Parma Payne Goodall Alumni Center. The event is free and open to the public, but registration is requested.

SDSU has arranged for high school students—many from underserved areas of the region—to attend Mimura’s lecture with the goal of introducing them to the university and the idea of pursuing careers in STEM (science, technology, engineering and mathematics) fields.

“Dr. Mimura is an internationally acclaimed researcher and it is an honor to welcome him to San Diego State University,” said Stephen Welter, SDSU’s vice president for research and dean of Graduate Affairs. “His groundbreaking findings in the semiconductor field have greatly contributed information and communication technology with applications ranging from satellite communication to car-borne collision avoidance systems using radar. He is an outstanding role model for not only our students, faculty and staff in STEM fields but also for life in general.”

During his lecture, Mimura hopes to inspire the audience, especially younger attendees, to take risks.

“In research and development, one tries to invent a new thing or solve a problem, which no one has ever done,” said Mimura. “It is therefore natural that most of new ideas and experiments turn out to be unsuccessful. I learned through the HEMT research that successful experiences are just as important for the growth of young people as unsuccessful ones.”

Mimura is an executive visiting researcher at Advanced ICT Research Institute in Japan and an honorary fellow with Fujitsu Laboratories, where he has worked since the 1970s.

Mimura noted that collaboration has been the key to success for many of his most cherished career accomplishments.

“I believe that research and development can’t be executed by one person in any research fields,” said Mimura. “I was so glad when I could share joy and excitement with my colleagues who worked on semiconductor crystal growth for the development of the HEMT.”

Hello everyone, was interesting to read your article. Usually i'm reading New York Times , but now i will read you too! (https://www.nytimes.com)