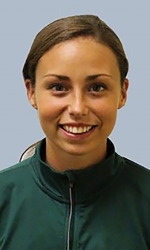 “We are extremely excited to have Nikki join the Aztec lacrosse family,” White said. “Nikki not only brings a lot of experience to the attack from her amazing career at Louisville, but also brings first-hand knowledge of the new rules that were adopted into our sport this summer after playing two seasons in the women’s pro league. We love Nikki’s intensity, competitiveness and focus on player development. She will have an immediate impact on our program.”

Prior to Stetson, Boltja spent the 2016 season as an assistant at Baldwin Wallace University in Ohio, doubling as the girls lacrosse head coach at her prep alma mater Medina High School.

Meanwhile at Medina High, Boltja was named Greater Cleveland Conference Coach of the Year after guiding a Bees squad to an undefeated record in league play and elite eight finish in the state tournament despite just having just one returning starter from the previous season.

“I am incredibly grateful for the opportunity to join the SDSU lacrosse coaching staff,” Boltja said. “I am looking forward to working alongside such passionate coaches and players at a university with such a strong athletic and academic reputation. I cannot wait to begin.”

As a collegiate star at Louisville, Boltja merited IWLCA All-America distinction on two occasions for the Cardinals, earning third-team honors in 2013, before receiving first-team recognition in 2014.  A three-time all-region and all-conference selection, Boltja was the unanimous Big East Offensive Player of the Year during her senior campaign in 2014 after leading Louisville to its first NCAA Tournament berth and top 10 national ranking. She finished third nationally in goals (71), goals per game (3.55) and points per game (5.00) that season and ranked fourth in points (100).

Overall, Boltja ranks second on the Cardinals’ career list with 235 points and 93 goals. She also occupies the third spot in school history with 42 assists and nine game-winning goals.

After receiving her bachelor of science degree in health and human performance with a concentration in exercise science, Boltja served as volunteer assistant at Louisville in 2015. She also has experience as a club coach, including stints with Cardinal Elite Lacrosse, Ohio Premier Lacrosse, Midwestern Force Lacrosse and XTEAM Lacrosse.