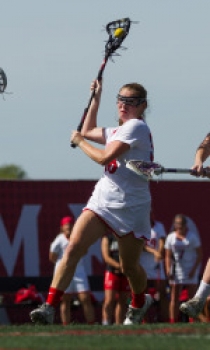 November 30, 2016 (San Diego) - San Diego State lacrosse head coach Kylee White has released her team’s schedule for the 2017 campaign. A program-high 10 home games are on deck for the Aztecs next spring, including five against Mountain Pacific Sports Federation opponents.

SDSU commences its sixth season of competition with a pair of league contests, battling Denver in the opener at Aztec Lacrosse Field on Feb. 4, before heading to the Pacific Northwest a week later to face Oregon on Feb. 11. The Scarlet and Black have won two straight against the Ducks, including a 10-9 thriller on Montezuma Mesa a year ago.

Following a home scrimmage against Claremont-Mudd-Scripps on Feb. 18, San Diego State will make its longest road trip of the regular season when it travels to the Midwest to face Big Ten foe Michigan on Feb. 24. SDSU will then remain in the Mitten State to lock horns with Detroit Mercy two days later at Ultimate Soccer Arenas, an indoor facility located in Pontiac, Mich. The Titans, who have advanced to four straight Atlantic Sun tournament finals, fell to the Aztecs by a 14-6 count in the last meeting between the two sides in 2013 at Columbus, Ohio.

SDSU will return to “America’s Finest City” for a lengthy seven-game homestand, including four straight against non-conference foes. The Aztecs’ month-long respite from the road begins with a showdown against Patriot League member Boston University in the first-ever encounter between the two squads on March 5, followed by a tilt with Atlantic 10 foe Saint Joseph’s on March 15. The Aztecs will be looking for their second straight triumph over the Hawks after posting a hard-fought 15-13 decision last year in Philadelphia, Pa.

San Diego State continues its busy stretch with a pair of matchups against two additional first-time opponents in New Hampshire (March 15) and Columbia (March 18). The Wildcats, who recorded a 6-12 overall record last season, tied for fourth in the America East Conference before falling to perennial power Stony Brook in the first round of the league tournament. Meanwhile, the Lions finished with a 6-9 mark in 2016, tying for seventh in the Ivy League standings.

The Aztecs step back into conference play for their next two games the following weekend, squaring off against MPSF rivals Saint Mary’s (March 24) and California (March 26). The Scarlet and Black has captured all six previous encounters against the Gaels, including a convincing 17-4 victory on the road last season. In addition, SDSU will be looking to avenge a tough 10-9 overtime defeat to the Golden Bears in 2016 after winning two straight in the series.

After wrapping up their non-conference ledger at home against another Ivy League squad in Brown on March 31, the Aztecs will play five straight MPSF games to close out the regular season, starting on April 3, when they make a quick trip to the Central Valley to take on Fresno State

SDSU will draw a tough assignment in their next outing when they play host to USC on April 8. The Women of Troy captured the MPSF tournament title in 2016 and advanced to the NCAA quarterfinals, ultimately finishing with a No. 4 national ranking. The Aztecs will conduct their home finale the following week on April 16, entertaining a Colorado squad that has posted three straight campaigns of 11 wins or more.

San Diego State will then head to northern California for the final weekend of the regular season, engaging UC Davis on April 21 before facing Stanford two days later on April 23. The Aztecs experienced a tough 7-6 overtime loss to the Aggies at home last season, but were victorious in their last visit to Davis in 2015, when they came away with a 12-9 decision. Meanwhile, the Cardinal finished with a No. 8 national ranking a year ago after advancing to the NCAA Tournament for the sixth time in the last seven seasons.

SDSU will be seeking a return trip to the MPSF Tournament, which is scheduled for April 27-30, in Los Angeles, Calif. SDSU made consecutive appearances in the conference tournament in 2014 and 2015.