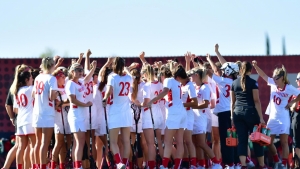 Following a home exhibition contest against Claremont-Mudd-Scripps on Feb. 2, the Aztecs open their eighth season of competition with a weekend trip to Las Vegas for pair of neutral-site encounters against former MPSF adversaries Oregon (Feb. 15) and California (Feb. 17).

SDSU has won two straight and four of the last five meetings vs. the Golden Bears, including a 12-11 nail-biter last season in Berkeley. Similarly, the Aztecs have emerged triumphant in three of the last four engagements with the Ducks, highlighted by an 18-13 conquest in the first round of the 2017 MPSF tournament, which marked the Scarlet and Black’s first-ever postseason victory.

San Diego State will play host to USC in its regular-season home opener at Aztec Lacrosse Field on Feb. 22. The Women of Troy are also former members of the MPSF who fell to Stanford in the semifinals of the inaugural Pac-12 championships last year after advancing to the quarterfinals of the NCAA tournament in 2017.

Two days later, SDSU will venture to the desert to battle Ivy League foe Columbia in another neutral-site contest on Feb. 24 in Tempe, Ariz. The Aztecs will be looking to avenge a 14-11 setback to Lions in the first meeting between the two squads on The Mesa in 2017.

Following an eight-day hiatus from competition, San Diego State will play five consecutive home games starting on March 5 when it squares off against Central Michigan. The Chippewas compete in the Southern Conference for lacrosse and feature former Aztec goalkeeping standout Katrina Reeves as an assistant coach.

SDSU will soon tackle four additional first-time opponents when Vanderbilt (March 8), Lehigh (March 10) and Bucknell (March 13) invade “America’s Finest City” in succession. The Commodores are affiliated with the American Athletic Conference for lacrosse, while the Mountain Hawks and Bison are both members of the Patriot League.

The Aztecs will wrap up their homestand on March 16 when they engage LIU Brooklyn in the third-ever meeting between the two teams. SDSU won the previous two encounters at Aztec Lacrosse Field in 2013 and 2014, outscoring the Blackbirds by a combined score of 43-7.

San Diego State will become veritable road warriors for the remainder of the campaign, beginning on March 22 with a clash at Cincinnati, another American Athletic Conference member. The Aztecs emerged triumphant in the only previous engagement between the schools in 2012, posting a 14-9 triumph on The Mesa in the program’s inaugural year.

Two days later, SDSU will make the short trek north to Big Ten country where it will battle Ohio State on March 24. Aztec head coach Kylee White played collegiately for the Buckeyes from 1999-2002, winning four letters to go with a trio of academic all-Big Ten selections. In 2002, she co-captained the OSU squad that made its first-ever NCAA tournament appearance.

San Diego State will return to the Eastern time zone the following week when it travels to Harrisonburg, Va., for a clash with defending national champion James Madison on March 30.  The Aztecs have faced the Dukes, members of the Colonial Athletic Association, on one previous occasion, dropping a 20-7 decision on the road in 2014.

As the calendar flips pages, SDSU will travel to the Bay Area for a meeting with former MPSF rival Stanford on April 4 before returning to northern California for a contest with league foe UC Davis on April 13.  The schools split their two meetings last season, with the Aztecs defeating the Aggies in an overtime thriller 11-10 in the finals of the MPSF Championship. SDSU last ventured to Davis in 2017, recording a 13-11 victory to clinch a spot in the conference tournament.

SDSU will make a return trip to the Grand Canyon State three days later to lock horns with Arizona State on April 16.  The Aztecs will be looking to make it two straight over the Sun Devils after logging a narrow 14-13 decision on The Mesa last season.

After a challenging six-game road swing, San Diego State gets to close off its regular-season schedule at home vs. Fresno State on April 20 to highlight Senior Day festivities. The Aztecs were triumphant in both games against the Bulldogs a year ago, including a 16-6 domination in the semifinals of the MPSF tournament.

UC Davis will serve as host for the 2019 MPSF Championships on April 26 and 28 at Aggie Stadium. The second and third seeds will battle one another in the semifinal match, with the winner advancing to the championship final against the No. 1 seed.