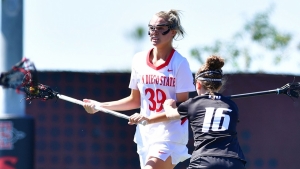 With the loss, the Aztecs move to 4-7 (0-1 MPSF) overall and record their first MPSF conference loss. The Aggies now sit at 8-4 with a 1-0 record in league action.

The Aztecs were led by the duo of redshirt senior Lexi Tan and senior Julia Sheehan on the offensive attack. Tan scored four goals with a 3-3 mark on free-position attempts while collecting two ground balls and causing a turnover. Sheehan earned her first hat trick of the 2021 season with three scores including a free-position goal. Also scoring for the Aztecs was senior Bailey Brown, sophomore Camdyn O’Donnell, and freshman Avonna Usher, each finding the back of the net once in the matchup with the Aggies. UC Davis saw their scoring come from Kendall Seifert, Maddie Mayers, and Alex Agnew, scoring four goals, three goals, and a hat trick, respectively. Four other Aggies scored twice while sophomore Mia Lawrence added one point to UC Davis’ total.

With her 14 saves throughout the day, redshirt senior Katy Sharretts moved into sole possession of the fifth-most saves in a career by a MPSF netminder, currently totaling 533 saves during her time donning the Scarlet and Black. Sharretts faced 33 shots for a .424 save percentage. Usher led SDSU with three ground balls while adding two draw controls. For the second time this season, Brown snagged nine draw controls, tied for the fourth-most in a single game in Aztec program history. Freshman Maggie Marion caused two turnovers, a team-high, while sophomore Caitlin Jones and senior Taylor Sullivan each grabbed two ground balls. UC Davis’ netminder Ashley Laing faced 22 shots, earning 12 saves for a .545 save percentage.

San Diego State scored first as Lexi Tan found the back of the net just 1:44 into the game. The Aggies responded with two scores, but Tan scored her second goal of the game to equalize the score. The Aggies would go on another 2-0 scoring run, broken up by Sheehan’s first goal of the game moving the score to a 4-3 advantage for the Aggies. UC Davis capitalized on their lead and widened it to a six-point margin with a 5-0 scoring run before the Aztecs could put another point on the board. Sheehan would go in for the Aztecs’ fourth goal, and both teams went back-and-forth scoring until the end of the first half. The Aggies went into halftime with an 11-5 lead.

Davis opened the second half with a 4-0 scoring run to set the score at a nine-goal advantage for the Aggies. From there, goals were exchanged back and forth, but the margin of the Aztecs’ deficit never broke eight goals.

The Aztecs have not secured a win over the Aggies in regular-season action since April 21, 2017, where the Aztecs clinched a spot in the 2017 MPSF tournament with a 13-11 road win over UC Davis.

San Diego State heads back to the friendly confines of The Mesa for a senior-day matchup with the Fresno State Bulldogs on Saturday, April 17. The opening draw between the MPSF foes is set for noon at Aztec Lacrosse Field.