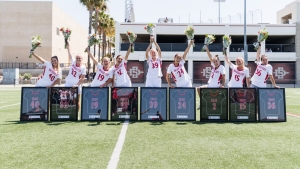 April 17, 2021 (San Diego) - On a day meant to celebrate the accomplishments of the 2021 senior class, the San Diego State lacrosse team showed their appreciation for their senior leaders with an 18-11 topping of Mountain Pacific Sports Federation (MPSF) foe Fresno State at Aztec Lacrosse Field Saturday.

With the win, San Diego State earned its first MPSF conference victory of the season to move the program’s record to 5-7 (1-1 MPSF). Fresno State recorded its ninth consecutive loss with the defeat Saturday (1-10, 0-1 MPSF).

Nine of the Aztecs’ 18 goals were scored by members of the Aztec lacrosse program who were honored before Saturday's game. Graduate student Emily Resnick earned a hat trick, seniors Madison Nunziata and Lexi Tan each found the back of the net twice and captains senior Julia Sheehan and graduate student Taylor Sullivan both added a point to the board in one of their final games at Aztec Lacrosse Field. Bailey Brown also added three goals while freshman Mia Kohn scored her first two collegiate goals in the win over the Bulldogs. The Aztecs saw their most impressive offensive output of the season with scores from 11 different student-athletes, including goals from sophomores Caitlin Jones and Makenna Nichols and juniors Cailin Young and Courtney Robinson. Resnick’s five assists throughout the game tied the school record for the most accumulated in a single matchup.

After six years donning the Scarlet and Black, it is no surprise that redshirt-senior Katy Sharretts would mark an incredible performance on the day meant to celebrate her career as an Aztec. The Bel Air, Md. Native recorded 16 saves in 53:09 minutes of action in the net for a .667 save percentage on the day. She also added two caused turnovers and four ground balls to her impressive stat line. Senior Ella Pejakovich closed out the game in the net for the Aztecs, recording two saves in 6:51 minutes of action. Nichols captured three ground balls while Young led the team with six draw controls. Robinson was also a force in the draw circle, collecting a career-best five draw controls throughout the matchup.

The Aztecs took off early and never looked back, scoring the first eight goals of the game. After holding the Bulldogs silent for the first 15:29 of the first half, Fresno State broke through to find the back of the net six times throughout the rest of the first 30 minutes of play. While the Bulldogs scored six times to close out the half, the Aztecs matched each of those scores to take an eight-goal lead into halftime, up 14-6 on their conference foe.

The second half was relatively quiet offensively compared to the first, as a running clock throughout most of the second half kept both teams to only find the back of the net a combined total of nine times. The Aztecs never allowed the Bulldogs to get any closer than a six-goal deficit to earn their first conference win of the season.

On a day marked to celebrate the seniors, freshman Mia Kohn scored her first two collegiate goals of her young career donning the Scarlet and Black. The last rookie to score more than a single goal in the Aztecs’ senior day game was now sophomore Caitlin Jones, who found the back of the net twice in SDSU’s senior day win over Fresno State on April 20, 2019.

“The game plan today was to honor our seniors by playing Aztec Lacrosse, which meant playing gritty, having fun, and playing with heart,” noted Aztec Lacrosse head coach Kylee White. “When we stepped on the field today, we knew that we were going to play as a family and send our seniors off with an amazing connected game. We are learning that when we played connected, this is the type of result we get. It is a lot more fun when you are playing with your best friends.”

The Scarlet and Black play in their final home and their final regular-season game of the 2021 campaign Sunday, April 25, hosting the Arizona State Sun Devils for a 1 p.m. game at Aztec Lacrosse Field.