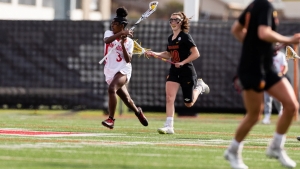 On the defensive front, netminder Katy Sharretts grabbed nine saves on 28 goal attempts, playing for 45:55 of the game. Sophomore Sam Horan came in for relief, grabbing three ground balls and three saves in 14:05 minutes of play. O’Donnell recorded a team-high four ground balls while Tan led the way in caused turnovers.  ASU’s goalkeeper Berkley Bonneau snagged three ground balls during her time in the net while recording 15 saves on 24 goal attempts for a .625 save percentage.

The match-up was high scoring at the start with eight goals scored between the two programs in the first 10 minutes off the game clock. Arizona State found the back of the net first with a shot from Carly Adams but the Aztecs responded immediately with a free-position make from Brown just 49 seconds later. With the score tied up, ASU’s Brodsky gave the lead back to the Sun Devils with a fast break make. O’Donnell knotted the game back up with her goal off a ground-ball pickup from Tan, and Arizona State responded with two goals from previous scorers Adam and Brodsky. SDSU responded with a two-goal run of their own thanks to a free-position shot from Young followed by a goal from Tan assisted by Resnick.

Adams would go on to score the next goal for the Sun Devils, earning a hat trick in just the first 12:22 of play. Redshirt-freshman Avonna Usher answered with her first collegiate goal to tie the game back up at 5-5.  Resnick added another score to bring the score to 6-5, leading the Sun Devils on a 7-2 scoring run with goals from five different scorers, ending the half up 12-8.

ASU’s Kaylon Butler became the Sun Devils’ seventh scorer of the day with the first goal of the second half, bringing the score to 13-8. From the first shot of the second half, ASU dominated the time of possession game and opened the final 30 minutes of play with five straight scores. Sullivan ended the Sun Devil run with a free-position make, cutting the ASU lead to 17-9 with 17:58 left in the game. Arizona State responded with two straight scores, Adam’s sixth goal of the day and the first goal of the game from Emily Munro. The Sun Devils controlled the rest of the game, adding six goals before time expired, with the only additional Aztec score coming from Usher with a minute left to play.

The Aztecs head back on the road next weekend for a Sunday matinee match-up with the California Golden Bears, Feb. 28. The opening draw is scheduled for 11 a.m.