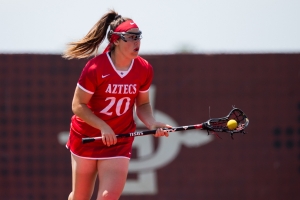 SDSU also received a pair of markers from Harlowe Steele, Bailey Brown and Taylor Sullivan to fuel its attack, as 12 different players found the back of the net for the Aztecs on a damp and blustery day.

Nursing a slim 2-1 margin with nearly five minutes elapsed in the first half, the Aztecs broke the game open with six consecutive goals to take a commanding 8-1 lead they would not relinquish. Greenlaw bookended the run with a pair of goals, including a successful free position shot at the 9:06 mark.

The Athenas momentarily interrupted the barrage on a tally by Alex Futterman just over a minute later; however, SDSU swiftly regained momentum, erupting for 10 straight goals through the halftime break to build an insurmountable 18-2 advantage by the 18:40 mark of the second period.

Greenlaw struck for two more scores and assisted on two others during that stretch, while Cailin Young dished out a pair of assists as well.

After CMS countered with three consecutive markers, Courtney Robinson and Arielle Shahrabani put an exclamation point on the Aztecs’ offensive production with a single goal each in the final eight minutes of the contest.

Grace McGinty was a key contributor to SDSU’s success in the middle, posting a game-high six draw controls, while Young finished with four. In addition, the Aztec cause was aided by Morgan Taylor and Julia Sheehan, who tied for team-high honors with four ground balls apiece, while Shannon Gallagher and Caitlin Jones collected three each.

Goalkeeper Katy Sharretts played the first half for the Aztecs and made three saves before giving way to Amanda Stapp and Sam Horan after the break.

Futterman and Sammie Cohen totaled two goals each for the visitors, while Maddie Geary and Sascha Reynolds had singles tallies, with the latter accounting for the final score of the day.

“We had a really balanced offense, which was exciting,” said SDSU head coach Kylee White. Kirstie dominated with six points; she’s someone who we’ve been looking at a lot to control our offense and she has a cannon of a shot. I was happy to see her be a feeder in addition to a finisher and she re-defended extremely well. I was very proud of that.”

“It took a while to figure out what they were doing defensively, but we were patient enough to figure out how to break it down, which allowed us to go on a scoring run. The re-defend, our team really bought into the fact that as soon as we lost possession, everyone was playing defense and we were hustling to get the ball back. That really helped today.”

“I think we still need to improve our communication and decision-making defensively, especially as the other team is transitioning it, but for the most part I was very pleased with our overall execution today.”

San Diego State opens its regular-season schedule in two weeks when it travels to Las Vegas for a pair of neutral-site encounters with Oregon and California, respectively, on the campus of Western High School. The Aztecs will square off against the Ducks on Friday, Feb. 15 at 7 p.m., before battling the Golden Bears on Sunday, Feb. 17 at 2 p.m.