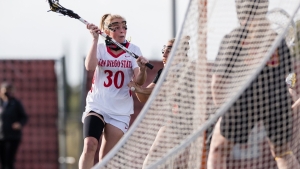 February 19, 2021 (San Diego) - The San Diego State lacrosse team earned its first win of the 2021 season with an 11-9 nighttime victory over the University of Oregon Ducks Friday, Feb. 19 at Aztec Lacrosse Field.

Young and junior Shelby Hook drove the Aztecs' defensive play as the duo each caused two turnovers. Young added two draw controls to her stat line while Hook also accumulated three ground balls throughout the evening. Goalkeeper Katy Sharretts led the team in ground balls with five on the night while earning 13 saves and a caused turnover. For Oregon, the Ducks’ Rooney caused three turnovers while netminder Alle Dunbar recorded a stat line of four ground balls and 13 saves.

Oregon’s Stump scored the first goal of the same with just 1:37 expired from the game clock, but the Aztecs responded just 30 seconds later with Young’s first points of the day. The Ducks would add another goal before San Diego State went on a 5-0 scoring run, bringing the game’s score to 6-2. Scoring then went back-and-forth between the programs to close out the first half, as the Ducks added two points to the board for a score of 4-6, the Aztecs retallied with two scores of their own, and Oregon finished the first 30 minutes of play with two goals to head into the halftime break with the score at 8-6.

The Ducks opened the second half with a score from McCardell with 24:13 left to play, leading to a 10-minute scoring drought between the two programs. The Scarlet and Black responded with 14:29 left to play, scoring on an unassisted goal from Resnick to bring the score to 9-7. Both teams would close the night with two more goals before the clock expired.

In a back-and-forth battle, the Aztecs outshot the Ducks 29-to-26, won the draw control battle 13-to-8, and earned nine more free position attempts than their opponent throughout the match-up. The Ducks won the turnover battle 17-to-18 and both netminders grabbed 13 saves.

“I am proud of how we competed tonight,” noted head coach Kylee White. “Oregon is a tough opponent but we did not back down throughout the entire game and played together to earn the win.”

SDSU hits the road for the first time in 2021, traveling to Tempe, Ariz. for a match-up with their third consecutive Pac-12 foe in the Arizona Sun Devils. The opening draw is set for 12 p.m.