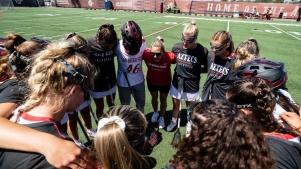 The Sun Devils shut out the Aztecs for the final 16:52 of play

April 25, 2021 (San Diego) - The San Diego State lacrosse team was unable to finish their regular season with a win, falling 20-11 in a matchup with the Arizona State Sun Devils at Aztec Lacrosse Field Sunday.

Sophomore Caitlin Jones led the scoring attack for the Aztecs, finding the back of the net four times. Redshirt senior Lexi Tan earned a hat trick in her final game at Aztec Lacrosse Field. Seniors Julia Sheehan and Bailey Brown alongside graduate students Taylor Sullivan and Emily Resnick rounded out SDSU’s scoring efforts with one goal apiece. Sheehan added two assists and two caused turnovers to her stat line, tying her season-best with three points throughout the day.

Redshirt senior Katy Sharretts spent most of the game in the net, grabbing eight saves on 23 shots-on-goal faced for a .347 save percentage while also causing two turnovers and securing a ground ball. Sophomore Sam Horan came in for relief with 14:15 left to play, totaling five saves on 10 shots faced for a .500 save percentage. Senior Lindsey Gierke led all Aztecs with three caused turnovers and Brown and freshman Mia Kohn each recorded two draw controls throughout the matchup. The Sun Devils’ defensive strike was led by an incredible performance by sophomore Lindsey Spies as the netminder grabbed nine saves on 20 shots faced for a .450 save percentage. ASU’s Maura Cissel recorded 17 draw controls throughout the game and Kerri Clayton and Gigi Gaspar each caused two turnovers.

The Aztecs kept up with the Sun Devils for most of the matchup, but a 9-0 run by the Sun Devils to close out the game gave ASU the victory. SDSU found the net first with 26:02 left in the first half, and a back-and-forth battle commenced between the two programs as neither team scored more than two consecutive goals throughout the first 30 minutes of play. Entering the second half down 8-7, Jones tied the game up with a score, but the Sun Devils responded with a three-score run. The Scarlet and Black rallied back with a three-goal run of their own, tying the score at 11 with 17:36 left in the matchup. ASU went on to silence the Aztecs for the rest of the game.

Caitlin Jones had her third four-score game of the season Sunday, totaling 16 goals in 9 games played this season. Fascinatingly, when Jones scores four goals, the Aztecs are 1-2 this season.

The Aztecs prep for the MPSF Conference tournament, taking on No. 3 Fresno State in the semifinal matchup on Friday, April 30 at 2 p.m. in Fresno, Calif. The winner of that game goes on to play No. 1 UC Davis in the championship game Saturday, scheduled to start at 2 p.m.