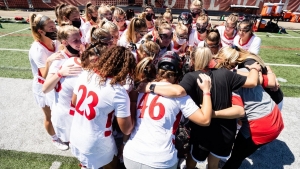 With the loss, San Diego State finishes its season with a 5-9 record (1-2 MPSF), while Fresno State moves onto the MPSF Conference Tournament Championship game, taking on UC Davis tomorrow at 2 p.m. in Fresno, Calif.

Sophomore Caitlin Jones led the scoring for the Aztecs, finding the back of the net four times for the fourth time this season. Redshirt senior Lexi Tan and graduate student Emily Resnick both scored twice, while seniors Julia Sheehan, Taylor Sullivan, and Bailey Brown each added a goal to the Aztecs' final total. Sheehan added two assists and two ground balls to her stat line, while Resnick had an assist, draw control, and a caused turnover throughout the matchup. Fresno State's Sydney Skalstad recorded four goals, Hannah Krats earned a hat trick, while MPSF Rookie of the Year Logann Eldredge, Megan Walatis, and Devon Ortman each scored twice.

The Bulldogs got off the first score of the game, finding the back of the net during a free-position shot attempt from Krats. A little more than a minute later, Sheehan recovered a wide shot from Robinson and passed to Tan for the Aztecs' first goal of the day. Fresno State responded with a two-goal run led by scores from Ortman and Skalstad, but the Aztecs responded with a four-goal run of their own including three goals from Jones and a score from Sheehan. The next five scores alternated between the Bulldogs and Aztecs, with FSU getting off the last goal of the first half, but the Scarlet and Black led after 30 minutes of play, 7-6.

The Bulldogs quickly tied up the score a minute into the second half off a score from Eldredge. Tan gave the Aztecs back the lead with a great cut to the net, but the Bulldogs would score twice to take a 9-8 lead. Resnick answered with two consecutive goals while Fresno State's Krats followed suit to give Fresno State an 11-10 lead. After nine minutes of tough defensive play and no scores by either team, Sullivan found the back of the net for the equalizer with 9:18 left to play.

With the score tied at 11, the Bulldogs would find the back of the net for the final three scores of the day to decide the game. Fresno State's three-goal margin with less than two minutes left in the matchup was the lone time either team led by more than two goals throughout the matchup.

Caitlin Jones is the only Aztec to score four goals in more than one game this season, finishing the 2021 season totaling four games in which she found the back of the net four times.

"It was an honor to play Fresno today— a team that has been through so much and left it all out on the field for their program," noted head coach Kylee White. "It has been a privilege to play them and we wish all the lacrosse student-athletes the best of luck in their championship tomorrow and their future with lacrosse.

"Our team fought hard today, but it just was not meant to be. I am so proud of this group and what they sacrificed this year to make it to today's game. They gave all they could to the Aztec lacrosse program and the San Diego State Athletic Department. The seniors who played in their final game today were a talented group with so much heart and helped take our program to the next level. I am forever grateful to have coached these young women and look forward to watching them grow as people beyond the field."

Today's game ended the Aztecs' 2021 season, a campaign that included the program's first-ever win over the University of Southern California and four wins over Pac-12 programs.