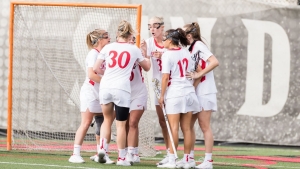 February 28, 2021 (Berkeley) -  The San Diego State lacrosse team came out on the right side of a battle in Berkeley, beating the California Golden Bears 12-11 in California Memorial Stadium on Sunday, Feb. 28.

Two different Aztecs earned hat tricks in the matinee game as junior Courtney Robinson and senior Bailey Brown each found the back of the net three times throughout the day. Senior Julia Sheehan and redshirt-senior Lexi Tan both added two scores to the Aztecs’ total. Cailin Young scored twice in the game, highlighted by her goal with 3:15 left in the game to solidify the win for the Scarlet and Black. Cal’s Megan Mix led the way for the Golden Bears’ scoring attack with five goals.

Netminder redshirt-senior Katy Sharretts had another stellar performance, accumulating 13 saves on 24 shots for a .542 save percentage on the day. Brown added three caused turnovers, three draw controls, and two ground balls to her already impressive stat line, while freshman Brook Waddell led the team with four ground balls and senior Emily Resnick had three draw controls. Cal’s defense was led by a duo of goalkeepers amassing nine total saves and a .429 save percentage on the day. LizaBanks Campagna was the Golden Bears’ leader in both draw controls and caused turnovers with six and four, respectively.

The Aztecs’ scoring in the first period was dominated by two-goal runs by the Scarlet and Black. SDSU scored the first two goals of the game thanks to Brown and Tan’s shots to the back of the net. Cal responded with two goals of their own from Megan Mix and Nikki Zacarro to tie the game up with 21:59 left to play in the first. The Scarlet and Black came back with two more scores, one from Tan for her second goal of the day and a free-position goal from Courtney Robinson, her first of the season. After a goal from Cal’s Maya Lawliss, Brown, Sheehan, and Robinson each added a score to give the Aztecs their largest lead of the day, up 7-3. Before the end of the half, Sheehan found the back of the net for the second time and Robinson accrued a hat trick to add two more points to the Aztecs’ total before halftime. The Golden Bears’ Mix scored the last goal of the half with four seconds left to play, sending both teams to their benches with the score at 9-4.

After almost eight scoreless minutes to open the second half, Brown earned herself a hat trick with the first goal of the second half. With the score at 10-4, Cailin Young added a score just 40 seconds later to bring the Aztecs’ lead to 7. Cal saw its first points of the second half from Quinnlynn Mason, sending the score to 11-5. Another quick two Cal goals sent the scoreboard to 11-7, but the Aztecs then held the Golden Bears silent for almost 10 minutes. With 7:10 left in the game, Cal added on their fourth consecutive goal, moving the game to a score of 11-8, and just seconds later cut the game down to a two-goal score of 11-9. California would go on to add another score and cut the game to a one-goal lead with 5:32 left to play.

Young ended the Golden Bears’ scoring streak with her second goal of the day, moving the score to 12-10 and adding what would turn out to be the game-winning points to the board. With 48 seconds left in the game, Cal added a score to bring it back to a one-goal lead, 12-11. The Golden Bears would try and add a last-minute goal to tie it, but the Aztecs’ stellar defense kept Cal from finding the net as time expired.

Junior Courtney Robinson not only scored her first goal of 2021 this game but earned a hat trick for just the second time while donning the Scarlet and Black. It is the first time since March 8, 2020, that two Aztecs (Robinson and Brown) have scored three goals apiece in the same game.

"Every time we play Cal, we know we have to battle until the very last whistle," head coach Kylee White noted. "We played tougher today and had some amazing moments on both ends of the field, however, we need to be more disciplined overall, especially in the second half. I am really excited to see more names on the stat sheet and a more united defense. We are headed in the right direction but have more things to tighten up."