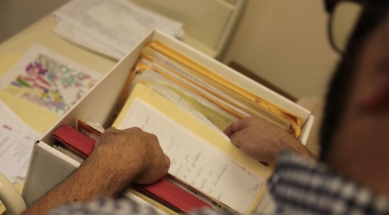 A new archive of hundreds of letters between a group of volunteers and asylum seekers along the U.S.-Mexico border has been developed and is being digitized at the SDSU Library.

February 13, 2019 (San Diego) - What began as a casual gathering of friends has become a first-of-its-kind living archive of handwritten letters shared by hundreds of asylum seekers detained along the U.S.-Mexico border. Those letters, in the collective correspondence, provide a detailed description of each person’s path to pursuing asylum, and the conditions inside detention centers.

It was the summer of 2018. Joanna Brooks, San Diego State University associate vice president for Faculty Advancement, and Jennifer Gonzalez, a legal communicator with expertise in immigration, had organized with friends and neighbors a grassroots group, named Detainee Allies. The group has provided support for refugees arriving at Tijuana, Mexico, from Central America, at a time when more and more migrants were being held in privately-run prisons.
“We realized that hundreds of refugees were being detained at Otay Mesa Detention Center, just 25 miles south of campus,” Brooks said.
Gonzalez and Brooks, along with colleagues from SDSU, friends and neighbors, sat with the weight of the refugee crisis unfolding at the border. They were deeply saddened but had that heart-and-stomach-felt compulsion that kept saying, “Do something.”
They found a way through the U.S. Postal Service.
At the end of June, SDSU faculty and volunteers with Detainee Allies, wrote and mailed 30 letters to a group of refugees who had arrived from Honduras in May.  About one week later, they received more than one dozen letters in return, providing a rare view into their stories of migration and their living and working conditions in real time.
That was the start of the Otay Mesa Detention Center Detainee Letter Collection.

What began as a basic act of human kindness has evolved to include dozens of students, faculty, staff and community volunteers exchanging letters over months with more than 220 people in detention.  While in detention, some have even shared original artwork made from materials from within the detention center in addition to the letters, providing a more complex, first-hand account of the detention facility conditions.
“Both for the SDSU faculty involved and for our volunteers, the goal has always been to lift up the stories of the people inside the black box at the border,” said Brooks, also a SDSU professor of English and comparative literature.
“This is also about finding ways to make our scholarship and research public-facing to be both careful meaningful and to connect human beings to each other,” she said. “This is what we all need now.”
That letter-writing effort has also become a major research and archival project involving the SDSU Library, whose Digital Collections team is digitizing hundreds of pages of letters. All told, more than 500 letters have been exchanged to date. To support the library initiative, which includes continued archiving, a new fund has been established: https://library.sdsu.edu/detainee-letters-donate.
On Feb. 1, the SDSU student and faculty researchers co-released a new report, titled “Testimony from Migrants and Refugees in the Otay Mesa Detention Center,” alongside Detainee Allies. The report details accounts of insufficient food, unsafe working conditions, not having appropriate access to legal representation, access denied to phones and mail, among other conditions. Some migrants describe feeling less than human, describing that they would read and reread letters because they were the only connection they had beyond detention.
“Detainee letters give us a very stark view into the lives of asylum-seeking refugees and migrants now held in American prisons,” said Kate Swanson, an associate professor of geography at SDSU and a co-author of the report. “Letters from detainees who have been moved from San Diego to prisons in other states suggest that these conditions are not unique to the Otay Mesa Detention Center.”
The report has since been shared with the U.S. Department of Homeland Security’s Office of Civil Rights and Civil Liberties and others, arriving as California Attorney General Xavier Becerra is investigating the conditions at all detention centers in the state.
“The stories these refugees tell remind us of the fragility and vulnerability of human communities in the twenty-first century,” Brooks said.  “And they show us the humanity of the people in detention.”

While the letter-writing initiative began with individuals from Honduras, the collection includes letters written by people from around the world, including countries such as Afghanistan, Brazil, China, Colombia, Cameroon, El Salvador, Ukraine, Mexico, Nicaragua and Venezuela, among others - all of whom are now or have been detained at Otay Mesa
“This is unique archive because it is happening now,” said SDSU University Archivist Amanda Lanthorne.
The SDSU Library continues to digitize each individual letter as part of the new archive. The letters have been redacted to protect the identity of their authors.
“Because we are committed to information literacy and lifelong learning, and creating global citizens, it is imperative to archive these detainee letters and make them available,” said Patrick McCarthy, interim dean of the SDSU Library. “They will inform current and future conversations about immigration, refugee culture, the lives of migrants and asylum seekers, and San Diego as a key player in these interwoven topics.”
In conjunction with the release of the report, the first digital copies were made available on Feb. 1 via SDSUnbound, the university’s digital repository, providing access to students, journalists, researchers, government officials and members of the general public.
“The collection will provide valuable primary source data for scholars today and for years to come,” McCarthy said. “Library archives play a critical role in democratic societies by collecting, preserving, and providing access to the written memory of humankind. We are committed to adding these stories to our archives because ultimately their stories are our stories.”