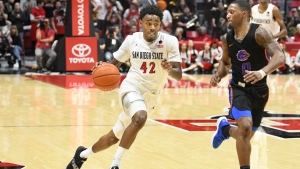 SDSU (16-9, 8-4 Mountain West) won for the sixth time in its last seven outings and ran its home conference winning streak to 12 games in splitting the season series with the Broncos (11-15, 6-7).
Boise State, which earlier this year embarrassed SDSU with a 24-point drubbing in the conference opener, was led by Justinian Jessop's 19 points.
SDSU, after a sluggish first half, went ahead 45-35 with 14 minutes remaining when Watson hit his second three-pointer in three minutes, with his two free throws separating his long-range shots. The Aztecs outscored the Broncos 14-2 over a four-minute span to enjoy their biggest cushion of the game.
The Broncos mounted a few charges at the Aztecs, but SDSU countered them by handling the ball better and improving its aim.

Boise State pulled to within four points with 45 seconds to play on RJ Williams' put-back and then a free throw by Pat Dembley, who replaced an injured Williams. Jessop's three-pointer later sliced it to 68-65 before Watson's free throw helped seal the win.

Boise State bolted to a 5-0 lead as it was clear the Aztecs were in for an uneven first half. They would take a one-point lead some five minutes in but then they went nearly five more minutes before converting another field goal.
SDSU missed on nine of its initial 13 shots from the floor. Twelve minutes into the game the Aztecs had more turnovers (six) than field goals (four). McDaniels was among those misfiring, hitting but one of his first six shots.
But the Broncos couldn't take advantage with the Aztecs staying close thanks to their work at the free-throw line, sinking six of their first seven attempts. When McDaniels, who paced the Aztecs with eight first-half points, sank his second straight shot SDSU took the lead, 23-22, three minutes before halftime.
Boise State went on 6-0 run as again the Aztecs were sloppy with the basketball, with Jessup's three-pointer pushing the Broncos ahead 29-24 before they exited with a four-point advantage.
In the opening 20 minutes, SDSU was 9 of 25 (36 percent) with 10 turnovers, which is more than it had in the entirety of two of its last four games.
BIG PICTURE
Boise State: After three straight games against California schools the Broncos won't travel east of UNLV for the remainder of the regular season.
San Diego State: The Aztecs' offense needs to overcome its slow starts down the stretch. For the second time in its last five games it had 25 first-half points.
UP NEXT

San Diego State faces No. 7 Nevada at home on Wednesday.