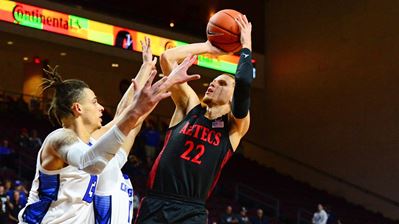 
Trailing 22-20 with 7:08 to play in the first half, San Diego State went on an 18-0 run in a little over six minutes to break the game open and took a 40-25 lead into the intermission.
The run featured four three-pointers, including a pair from Matt Mitchell, who scored eight points in the spurt and finished the game with 16.
Yanni Wetzell added 15 points, his fourth straight game in double figures in the scoring column, and Jordan Schakel had 13 points for San Diego State.
The Aztecs outrebounded the Bluejays 37-21 and forced Creighton in to 15 turnovers which they used to score 23 points.  The Aztecs' biggest lead of the game was 36 (81-45) points with 2:56 to play before taking the 83-52 victory.
Mitch Ballock had 12 points for the Bluejays (4-2). Shereef Mitchell added 10 points.

San Diego State plays Iowa for the championship of the 2019 Continental Tires Las Vegas Invitational on Friday at 5 p.m.