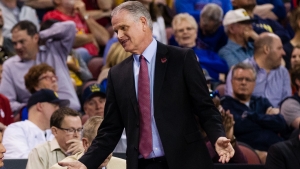 August 22, 2018 (San Diego) - San Diego State men’s basketball head coach Brian Dutcher has signed a contract extension that will keep him on The Mesa through the 2022-23 season. The extension comes five months after Dutcher led the Aztecs to the program’s Mountain West-leading 11th conference title and to the NCAA tournament.

“I am extremely grateful for the opportunity to be able to coach at San Diego State for the foreseeable future,” Dutcher said. “I would like to thank athletic director John David Wicker, the administration and the University for believing in what we, as a program, are doing. I am excited for school to get going and having the players back on campus so we can work toward defending our Mountain West championship.”

In 96 previous seasons of Aztec basketball, no head coach had won more games and/or won a conference title in his first year until Dutcher accomplished the feat. He was also the only first-year head coach in America to lead his team to the 2018 NCAA tournament.

“In his first season, Coach Dutcher continued what has been a staple of the San Diego State men’s basketball program -- continued improvement and playing its best basketball heading into the postseason,” Wicker said. “I have been impressed with how he has put his own stamp on the program and I look forward to seeing Aztec basketball grow under his leadership.”

Dutcher, who is entering his 20th season overall at SDSU and second as head coach, is coming off a 2017-18 campaign in which he led the Scarlet and Black to a 22-11 record and the postseason for the 12thtime in the last 13 years.

A long-time assistant under former head coach and two-time National Coach of the Year Steve Fisher, Dutcher took over the program in April of 2017 and put together a roster that picked up high-profile wins over Georgia and No. 12/15 Gonzaga prior to the start of conference play.

The Aztecs experienced a rash of injuries to key pieces, but caught fire once their health improved, winning six consecutive games to end the regular season, which included a victory over No. 21/21 Nevada, and earning a bye into the quarterfinals of the Mountain West Championship.

SDSU continued its hot streak in Las Vegas at the conference tournament by posting double-figure wins over Fresno State and No. 22/22 Nevada to reach the championship game against New Mexico. The Aztecs led the Lobos for a majority of the game before UNM took a six-point lead with 7:39 to play. SDSU, however, responded by outscoring New Mexico, 25-12, the rest of the way to earn the MW’s automatic berth to the NCAA tournament. The NCAA appearance was the program’s seventh in the last nine years.

Dutcher, who guided SDSU to its 13th straight campaign of at least 19 victories (t-7th longest active streak nationally), has been a part of 641 wins at the Division I level, covering 29 seasons, and 408 victories while at San Diego State. He has also been to the NCAA tournament 17 times (9 at SDSU) and the postseason on 24 different occasions (14 at SDSU).

This season, Dutcher will welcome back three returning starters (all-conference forward Jalen McDaniels, Matt Mitchell, Devin Watson) on a team that is looking to defend its Mountain West crown. In all, the Aztecs return six letterwinners from last year and will bring five freshmen into the fold, including redshirt freshman Adam Seiko, who was a member of last year’s travel squad.