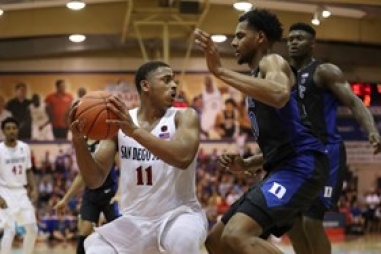 November 19, 2018 (Maui) - SDSU men’s basketball kicked off the annual Maui Jim Invitational in Hawaii this week with a matinee quarterfinal game against the best team in the country, the Duke Blue Devils.  Both teams were undefeated coming into today, Duke 3-0 and SDSU 2-0.

To the surprise of many, Duke came out...not looking like Duke at all.  SDSU was able to get out to an early lead, but Duke found their groove and nailed threes from freshmen R.J. Barrett and Zion Williamson.  SDSU remained at two for three minutes until sophomore Jalen McDaniels laid it up, but easy layups weren’t falling for the Aztecs.  The Blue Devils just kept raining threes, including one more from Barrett and one from junior Jack White.  The Australian knocked down two threes to give the Blue Devils five first-half threes.  The Aztecs on the other hand kept fouling, turning the ball over and were just not fast enough to stop the speedy #1 Blue Devils.  Duke’s five-freshman core left the upperclassman Aztecs stunned and shellshocked; nothing fell for the Aztecs, not even free throws and they went to the locker room down 49-32.

Two threes from senior Devin Watson helped, but the Aztecs crawled through the second half with the same lethargy as they did in the first half.  The Blue Devils steamrolled the Aztecs and eliminated them in the first round of the Maui Jim Invitational for the first time in a long time, 90-64.