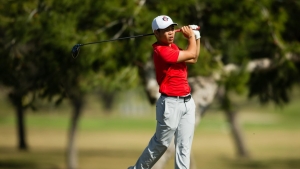 February 26, 2019 (Westlake Village, Calif.) - Playing its second spring tournament, the San Diego State men’s golf team finished in eighth place at the Southwestern Invitational on Tuesday after shooting a 2-over-par 290 during the final round at North Ranch Country Club.

The Aztecs slipped two spots into ninth place earlier this morning after wrapping up the second round, which was suspended on Monday due to darkness. Despite posting its lowest team total of the tournament during the final round, however, SDSU managed to climb just one notch into eighth place, completing the week with a 54-hole total of 17-over 881 on the par-72, 6,992-yard loop.

Thanks to a birdie on the 18th hole by USC medalist Justin Suh, the Trojans (-4) edged California (-3) for the team title; UCLA (+1) landed in the third spot, while host Pepperdine (+5) took fourth.

Individually, the Aztecs were paced by Joey Moore (Billings, Mont.), who tied for 13th with a 1-over 217 after firing a 74. Starting on the 10th tee, the SDSU freshman was on fire over his first nine holes, playing spot-free golf, highlighted by a trio of birdies. After making par on the first and second greens, Moore was inconsistent the rest of the way, recording only one additional birdie against four bogeys and one double bogey, which hastened his drop of five places on the leaderboard. Despite the stumble, though, he still completed his fourth top-20 of the season.

The Scarlet and Black’s four remaining starters finished within four strokes of one another, including Puwit Anupansuebsai (Nakhon Phanom, Thailand), who leaped seven places into a tie for 29th at 6-over 222 thanks to a final-round 72. The Aztec sophomore offset four bogeys with a quartet of birdies, including an impressive conversion on his penultimate green at the par-3, 235-yard No. 8, which ranked as the toughest hole of the week.

Unfortunately, Christian Banke (Danville, Calif.) experienced the opposite fate, tumbling 15 places into a tie for 32nd at 7-over 223 after shooting a 77. The SDSU sophomore opened with seven pars to go with a birdie on the par-5 No. 12, but suffered bogeys on either side of the turn, followed by a double bogey at the par-4 No. 2. Despite five additional pars, Banke experience two more bogeys down the stretch, which precipitated his fall.

The Aztecs’ round of the day belonged to Zihao Jin (Beijing, China), who fired a 71 to vault 12 places into a tie for 38th at 9-over 225. The SDSU sophomore tied for the team lead with five birdies on the day, including back-to-back drains at the par-5 15th and the par-4 16th.

In addition, Newport Laparojkit (Montebello, Calif.) saved his best for last, shooting a final-round 73 three to finish the week in a tie for 46th at 10-over 226. The junior transfer tied Jin with five birdies of his own, including consecutive makes on the sixth and seventh greens. However, four bogeys and a double bogey on the par-3 No. 8 hampered his advance.

The Aztecs were also represented by Ambrose Abbracciamento (Newtown, Pa.), an individual competitor who tied for 57th at 20-over 236 after stumbling to an 80 over the final 18 holes.

In the race for medalist honors, Pepperdine’s Clay Feagler (-8) finished four shots behind the aforementioned champion Suh (-12), while California’s Collin Morikawa (-5) landed in the third spot.

San Diego State returns to the course in two weeks when it plays host to the Lamkin San Diego Classic March 11-12 at San Diego Country Club in Chula Vista, Calif.