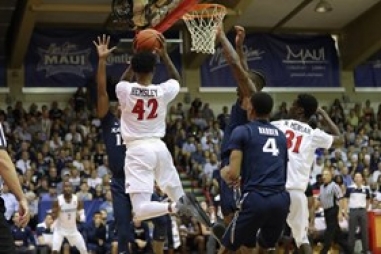 Just like yesterday, SDSU was left in the dust by Xavier.  If you were watching the game, you know what we mean; the Xavier guys were huge, towering over the Aztecs.  And once again, the Aztecs were killed by the three-ball, as the Musketeers drained threes from all over the court, going 4 for 5 from beyond the arc on an 8-0 run to open the game.  The only bright spot on the Aztecs was senior Devin Watson, who scored a team-high eight points in the first half.  The Aztecs picked up the pace at the end of the half with 14 points from redshirt sophomore Jalen McDaniels, including a monster three that got the Aztecs to within four.  The Aztecs stepped it up on defense too, blocking shots and leaving the Musketeers defenseless.  What was once a 19-point Xavier lead was cut to three by the end of the half, thanks to a huge three by sophomore Jordan Schakel.  The Musketeers led 40-37 at the half.

The Aztecs tied the game five minutes into the second half on a three from Watson, who also sunk another three to give the Aztecs their first lead of the game.  Where were these Aztecs yesterday?  Well, they were playing Duke, for one.  Today’s Aztecs were faster, more aggressive and their shots were falling.  The best part was that SDSU didn’t even need consistent pressure; like Helix grad Bill Walton said, “Xavier seems to have forgotten how to play basketball.”  Xavier wasn’t Xavier until the end of the half.  Things got a little tense, but the Aztecs stayed strong defensively and cruised to a 79-74 victory.