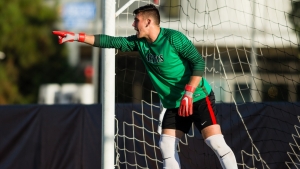 October 28, 2018 (Seattle) - The Aztec men’s soccer team suffered a 2-0 loss at Washington on a rainy Sunday afternoon. The Aztecs allowed two second half goals in a six minute span and fell to 1-6-0 in Pac-12 play.

In typical Aztec fashion, it was a defensive battle in the first half as each team managed just one shot on goal in the first frame. However, SDSU gave up six in the second half, including two goals.

Cameron Hogg, who came on to replace Max Watkin late in the first half due to an apparent injury, made a spectacular leaping save to push the ball over the crossbar in the 65th minute. However less than a minute after, UW scored their first goal following a corner.

Ethan Bartlow’s header ricocheted over the back of Dane Rozas’ neck and in to the upper left corner of the goal.

The Aztecs nearly scored in the 81st minute on an Aleks Berkolds’ header following a corner from Pablo Pelaez, but the UW goalkeeper was able to punch the ball away.

Pablo Pelaez was the only Aztecs with more than one shot, finishing with two. The Aztecs managed just three shots on goal.

Cameron Hogg was saddled with the loss despite five saves in 56 minutes. UW’s Bryce Logan recorded the shutout and had three saves.

The Aztecs played a season-high 19 players in the match

The 11 shots allowed were the most the Aztecs have given up to a Pac-12 opponent this season.

The Aztecs return home next week to host Stanford (Thursday) and California (Sunday).