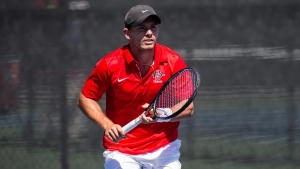 March 31, 2019 (San Diego) - San Diego State returned to the friendly confines of Aztec Tennis Center on Sunday to post a 4-0 shutout of Boise State in a Mountain West dual match.

SDSU rebounded from a 4-2 setback at Utah State on Friday, improving to 9-7 overall and 1-1 in conference play, while the Broncos fall to 10-5 overall and 0-2 in the MW.

The Aztecs were led by senior Sander Gjoels-Andersen, junior Rafael Gonzalez Almazan and fellow classmate Arnaud Restifo, who emerged victorious in both doubles and singles.

For openers, Gjoels-Andersen joined forces with sophomore Ignacio Martinez and captured their fourth straight decision with a 6-2 triumph over the Boise State tandem of Wyatt DeMullling and Stefan Lalovic at No. 1 doubles, while Gonzalez Almazan teamed with Restifo to pin a 6-1 defeat on Luka Soskic and Simon Stenlund moments later in the No. 3 position.

With a 1-0 lead safely tucked away, SDSU’s remaining duo of Jan Kirchhoff and Fabian Roensdorf had their match abandoned in the No. 2 slot after falling behind 4-3 to Simon Arca Costas and Jack Heslin.

Gjoels-Andersen was also the first Aztec off the court in singles after making quick work of Breslin with a 6-1, 6-1 conquest at the top of ladder, while Restifo soon followed with a 6-3, 6-2 victory Arca Costas in the fourth position.

Shortly thereafter, Gonzalez Almazan dispatched DeMulling on the No. 5 court by a similar score of 6-4, 6-2, completing the Scarlet and Black’s third shutout of the year and second of the week.

San Diego State continues its homestand next weekend for three matches next weekend when Fresno State, Santa Clara and Nevada invade "America's Finest City" on successive days. The Aztecs' clash vs. the Bulldogs is set for Frida, April 5 at 2 p.m., while encounters with the Broncos (April 6) and Wolf Pack (April 7) are both scheduled for a noon start.