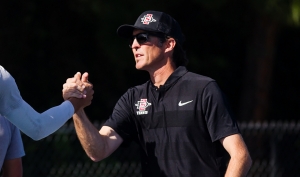 With the win, SDSU evens its record at 4-4 on the year, while the Pilots fall to 3-6 overall.

The Aztecs seized the early lead at 1-0 after collecting a pair of victories in doubles competition. The tandem of Sander Gjoels-Andersen and Rafael Gonzalez Almazan improved to 5-3 this spring with a 6-3 conquest of Tom Hann and Eleftherios Neos at the No. 1 position, while pairing of Fabian Roensdorf and Gavin Spencer emerged a 6-3 triumph over Leo Hibi and Nicklas Oberg in the third spot.

SDSU was unable to complete the sweep, however, as the pairing of Jan Kirchhoff and Ignacio Martinez suffered a 6-3 setback to Sema Pankin and Issa Yoshida on the No. 2 court.

No matter, as the Aztecs maintained the upper hand in singles by capturing four of six matches to close off the weekend on a high note.

Gjoels-Andersen experienced a tougher battle with Hann at No. 2, but still prevailed in straight sets to move to 5-3 in dual matches, while Kirchhoff raised his record to 6-2 this spring after pulling away from Neos in a three-set triumph 6-3, 6-7, 6-1 on court No. 4.

SDSU’s two blemishes were of the three-set variety as well, with Roensdorf falling in a nail-biter to Pankin at the top of the ladder 6-2, 3-6, 7-6, while Gonzalez Almazan suffered at similar fate vs. Yoshida in the fifth spot 6-2, 3-6, 6-2.

Carswell, who is in his 16th year as head coach at SDSU, has led the Aztecs to four Mountain West regular-season championships (2005, 2006, 2007, 2013) and one conference tournament title (2005) to go with a pair of NCAA tournament berths in 2005 and 2015. Individually, the San Diego native has coached four MW Player of the Year winners and two league Freshman of the Year recipients, while his players have garnered 33 all-Mountain West singles accolades and 17 all-conference doubles honors. Not to be outdone, Carswell has been named MW Men’s Tennis Coach of the Year on four occasions (2005-07, 2013) and was instrumental in developing All-America players such as Alex Waske, Oliver Maiberger, Ryan Redondo, Markus Dickhardt and Benedikt Stronk.

San Diego State returns to the friendly environs of Aztec Tennis Center on Thursday, Feb. 28 when it plays host to UC Davis starting at 2 p.m.  Admission to all SDSU home tennis matches is free.