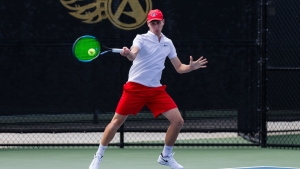 With the victory, the Aztecs (14-9) punched their ticket to the conference semifinals for the sixth year in a row, where they will face top-seeded New Mexico on Friday, starting at 11 a.m. The Lobos (14-7) took care of business in their quarterfinal matchup with a 4-0 shutout of Air Force.

In addition, SDSU has captured 11 of the last 12 meetings vs. the Rebels, improving to 25-10 in the all-time series dating back to 1989 and 6-0 in Mountain West tournament play against its conference adversary from Sin City.

For the ninth time in their last 11 matches, the Aztecs won the doubles round, with the newly-minted all-MW tandem of Sander Gjoels-Andersen and Ignacio Martinez providing the clinching point with a narrow 7-5 decision over Clayton Alenik and Eric Samuelsson in the No. 1 position. Thanks to the victory, the SDSU duo raised their record to 7-2 this spring.

Earlier, the Aztecs got the proverbial ball rolling when the tandem of Arnaud Restifo and Fabian Roensdorf outlasted the pairing of Tom Ciszewski and Richard Solberg by a 6-4 tally on the No. 3 court.

With the doubles outcome no longer in question, the combo of Rafael Gonzalez Almazan and Jan Kirchhoff had their encounter with Jordan Sauer and Olle Thestrup in the No. 2 spot suspended after falling behind, 6-5.

San Diego State extended its lead to 3-0 after the first two completed singles matches, as Martinez dispatched Solberg, 6-1, 6-3, in the No. 4 position, while Kirchhoff soon followed with a 6-3, 6-2 conquest of Thestrup at No. 2.

UNLV (13-9) finally dented the scoreboard when Alenik prevailed over Gonzalez Almazan in the sixth slot, 6-1, 6-4.

With the three remaining duels headed for a third set and momentum seemingly drifting toward the other side, Gjoels-Andersen promptly squelched the Rebels’ comeback hopes with a victory over Samuelsson at the top of the ladder. The recently selected all-MW singles honoree split his first two sets, 6-3, 3-6, before pulling away in the third, 6-2, for his team-leading 13th win of the spring.

Over on court five, Restifo dropped the opening set to Milos Dabic 6-4 before turning the tables by an identical count in the second to tie his match, but with the requisite fourth team point secured, the encounter was halted. Likewise, Roensdorf’s match at No. 3 was abandoned as well, with Sauer leading 5-0 in the third set.

San Diego State will be looking to advance past the MW semifinals for the first time since 2010, when it lost to TCU in the championship match 4-3. In addition, the Aztecs will be seeking to avenge a 4-1 loss to New Mexico during the regular season in Albuquerque on April 14. However, SDSU has won two straight in the conference tournament vs. the Lobos, including a 4-2 victory in the quarterfinals at Aztec Tennis Center last year.