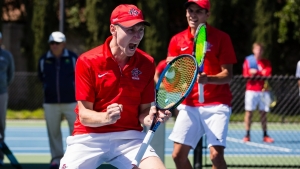 With the result, the Aztecs will face the winner of the Utah State-Fresno State encounter for the conference crown on Saturday at 1 p.m.  Links to live stats and streaming video will be available on goaztecs.com via the Mountain West Network.

In addition, SDSU (15-9) defeated the Lobos for the third straight year at the MW Championship, advancing to the tournament final for the first time since 2010, when it dropped a 4-3 decision to TCU.

Jan Kirchhoff provided the clinching point for the Aztecs at the No. 2 position on Friday after storming back for a three-set triumph over Dominic West 2-6, 6-4, 7-5.  In the final set, the Berlin, Germany, native raced to a 3-1 lead, only to see his Lobo adversary rally take the next three games for a 4-3 advantage. Moments later, the SDSU sophomore had a chance to close out the dual after reclaiming a 5-4 lead; however, an overhand smash went long and West eventually knotted the score at 5-5.

Undaunted, Kirchhoff went back to work, winning the next two games to finally put an end to the marathon affair, as his Aztec teammates erupted in jubilation.

SDSU came out firing on all cylinders in doubles, earning the pivotal point for the 10th time in its last 12 matches, with the all-MW duo of Sander Gjoels-Andersen supplying the winning result for the second day in a row, courtesy of a 6-3 decision over another all-conference pairing in Ricky Hernandez-Tong and Stepan Holis at the top of the rotation. With the victory, the Aztec tandem improved to 8-2 this spring.

Earlier on court two, Kirchhoff and Rafael Gonzalez Almazan wasted little time in their matchup with West and Facundo Bermejo at No. 2, posting a 6-0 shutout, as the Scarlet and Black improved to 12-2 in dual matches this year when capturing the doubles point.

With the doubles outcome no longer in doubt, the No. 3 match pitting the Aztecs’ Arnaud Restifo and Fabian Roensdorf against Tim Buttner and Nicolas Prieto was abandoned with the two sides deadlocked at 4-4.

Singles turned out to be a different story, however, as New Mexico (14-8) battled back to claim three of the first four decisions. The Lobos got on the board when Bermejo pinned a 6-1, 6-0 defeat on Restifo at No. 4.

SDSU answered with a straight-set victory of its own when Martinez won his third straight after dismissing Buttner in the fourth slot 6-2, 6-2. Moments later, though, Hernandez-Tong exacted a measure of revenge with a 6-3, 6-1 conquest of Gjoels-Andersen at the top of the ladder, while Holis followed suit by toppling Roensdorf at No. 3 6-4, 6-2.

With momentum tipping toward the UNM side, Gonzalez Almazan overcame a sluggish second set in his match versus Prieto in the sixth slot with a clutch performance in the third, where he ultimately prevailed 6-1, 0-6, 6-4, setting the stage for Kirchhoff’s heroics.