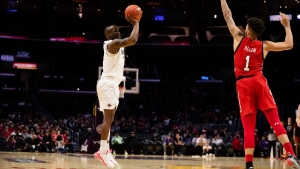 January 22, 2021 (Colorado Springs) -  Nearly six minutes into the first half, the San Diego State men's basketball team trailed 6-5 at Air Force, but then ignited the afterburners and went on a 47-10 run to end the half en route to a 98-61 victory over the Falcons on Friday night in Clune Arena.

The 37-point margin of victory was the largest ever for San Diego State in a Mountain West Conference road game, while the Aztecs handed the Falcons their largest home defat in nearly nine years.

San Diego State used an efficient offense, shooting 54.5 percent from the field and making 13 three-point field goals and a high-pressure defensive effort, forcing Air Force into 27 turnovers (its most since 1999) to cruise to its widest margin of victory in the 84-game history of the series.
Five Aztecs scored in double figures led by 18 points from Jordan Schakel. Aguek Arop and Adam Seiko each scored a career-high 14 points and Nathan Mensah and Keith Dinwiddie Jr, contributed 13 points each. For Dinwiddie Jr., his 13 points were also a career best.
The Aztecs forced 27 turnovers, including 15 steals, and converted them into 39 points and its bench outscored Air Force 57-to-26.
The teams play the second game of a two-game series on Sunday with the tip scheduled for 7 p.m.
BOUNCE BACK
After suffering its first two-game losing streak in a 48-game stretch, San Diego State took control early with a 22-0 run. The Aztecs have now gone 97 straight games without suffering a three-game losing streak.
GOOD ON THE ROAD
San Diego State is now 14-2 in its last 16 road games dating back to late in the 2018-19 campaign.
Box
Postgame notes