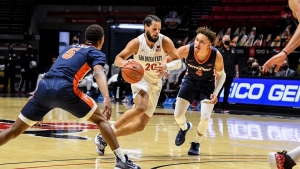 December 6, 2020 (San Diego) - The San Diego State men's basketball team used a 24-4 run midway through the second half to erase a 16-point deficit and defeat the Pepperdine Waves, 65-60 on Sunday afternoon at Steve Fisher Court at Viejas Arena.

Jordan Schakel led the offense for the Aztecs (4-0) with 17 points, Matt Mitchell finished with 13 and Joshua Tomaic totaled 10 points.

Down 47-31 with 16:16 left in the game, Tomaic, Schakel and Mitchell combined to score 21 of the team's 24 points in a 12:37 span to erase the Waves (2-2) lead and forge a four-point advantage, which they would not relinquish en route to the five-point win.
San Diego State returns to action on Thursday, Dec. 10 at Arizona State. The Aztecs and Sun Devils are scheduled to tip off at 7 p.m.
Box
Postgame notes
Postgame quotes