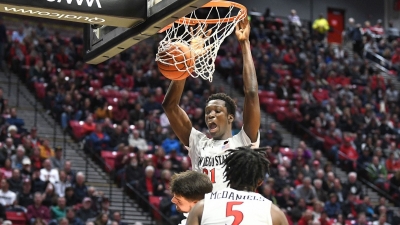 November 4, 2021 (San Diego) - San Diego State men's basketball held the Saint Katherine Firebirds to just 16 percent shooting in the first half and 27 percent for the game in a 65-44 exhibition game victory on Wednesday night in Viejas Arena.

The Aztecs defense was so dominant that Saint Katherine failed to hit back-to-back buckets until its 49th and 50th shot attempts, which came just prior to the four-minute media timeout. It went the first five-plus minutes without a bucket and with 13:25 to play in the first half was down 8-4. That is when the Aztecs offense turned the screws.

The team finished the half on a 26-10 run, which included at one point, eight straight points from senior transfer Matt Bradley. The Aztecs took a 34-14 advantage into the halftime locker room and cruised to the 21-point victory. It is the 28th consecutive victory for the program in an exhibition contest.
Overall, San Diego State was solid from the floor, shooting 40 percent for the game (25-of-62), but just 19 percent (5-of-26) from the bonus distance.
The offensive attack was shared by a game-high 15 points and a pair of assists from Bradley and Nathan Mensah, also a senior, had a double double with 14 points and 11 rebounds.
Junior Keshad Johnson had nine rebounds and a rim rattling dunk in the second half that brought the crowd of over 10,000 to their feet. Seniors Trey Pulliam and Adam Seiko scored seven and six points, respectively.
In total, 16 of the 17 eligible players for SDSU played and 12 appeared in the scoring column.
The regular season kicks off on Tuesday, Nov. 9 against the UC Riverside Highlanders. Tipoff is scheduled for 7 p.m. in Viejas Arena.
Box
Postgame notes
Postgame quotes