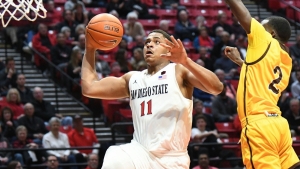 February 23, 2019 (Las Vegas) - Jalen McDaniels had 16 points, Matt Mitchell added 15 and San Diego State narrowly defeated UNLV 60-59 on Saturday night. The victory was the fifth straight this season for San Diego State, who is now 14-1 against the Runnin' Rebels in its last 15 meetings.