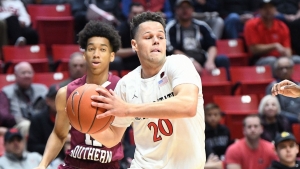 Jalen McDaniels, whose 17 points per game entering the matchup led the Aztecs, had only seven points (3 of 10).  Devin Watson he Aztecs' second leading scorer coming into the matchup at 16 points per game, was held to only five points (2 of 14).