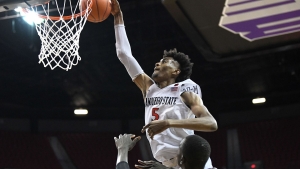 The Aztecs next face Nevada tomorrow in the semifinals at 6:00 p.m.