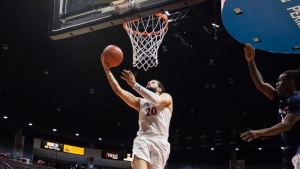 San Diego State scored 63 first half points, matching the Mountain West Conference all-time record for most points in the first 20 minutes of a game. The 63 points are also the most in the first half of any Division I conference game this season.

Terrell Gomez had 14 points for San Diego State (12-4, 6-3 Mountain West Conference), which earned its fourth consecutive home victory. Matt Mitchell added 13 points and seven rebounds. Lamont Butler had 13 points and a career-high six assists.
Kwane Marble II had 15 points and nine rebounds for the Cowboys (10-6, 4-5). Graham Ike added 10 points.
STREAKING
In its last three games, all against Mountain West Conference foes, San Diego State has outscored its opposition by 99 points (276-177). The Aztecs have connected on 40-of-80 three-point field goal attempts during that span (50.0 percent).
LONG DISTANCE
Senior guard Terrell Gomez entered the game as the nation's active career three-point field goal percentage (minimum 280 career makes). and his performance tonight will not hurt that ranking. Gomez posted his 89th career double-digit game by scoring 14 points on the strength of 4-for-4 shooting from beyond the arc. In his career, Gomez has made 325-of-747 three-point field goals for 43.5 percent.
UP NEXT
The same two teams meet at Viejas Area on Saturday night. Game time is set for 7 p.m. and the contest will be shown on CBS Sports Network.
Box
Postgame notes