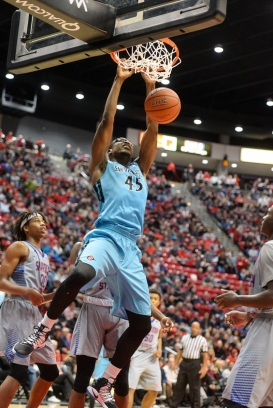 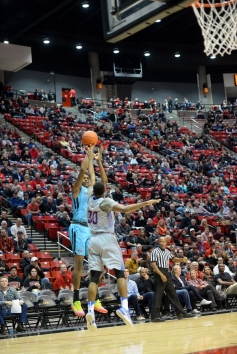 It's amazing how much one player can make a team’s play take a complete 180.  Junior forward Malik Pope did just that and the Aztecs were off to a 10-4 lead at the start of the first half.  Not only was it raining outside, it was raining inside thanks to senior forward Matt Shrigley’s rainstorm of threes and the Aztecs led 38-22 with nine minutes left in the half.  With the exception of two on sophomore forward Zylan Cheatham, two on senior guard Dakarai Allen and one on senior center Valentine Izundu, the Aztecs stayed out of foul trouble and instead went on a tear, up 43-26 with seven minutes left.  They were near perfect on free throws, with the only miss being from sophomore guard Jeremy Hemsley.  The Tigers were absolutely dominated by the SDSU offense and at the end of the first half, the Aztecs led 60-32.  Shrigley led the Aztecs in points with 15 and was 5-9 in three pointers. 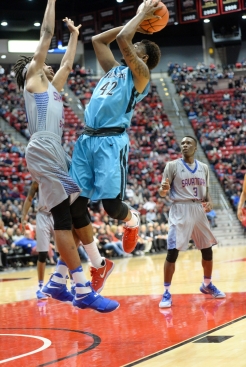 Shrigley's three point hot streak cooled off in the second half (as did the entire team's; they were only 3-14 in three pointers, ), but the Aztecs still came out hard and dominating, up 74-50 with under 12 to go.  In addition to a great performance from the starters, the Aztecs were proficient from the bench as well, leading the Tigers in bench scoring 35-25.  The Aztecs crossed the 100 point threshold for the first time this season and demolished the Tigers by a commanding final score, 100-67.

Next up for the Aztecs men is a trip to Chicago to face Loyola on Saturday.  Tipoff is at 1:00 p.m. Pacific Time.