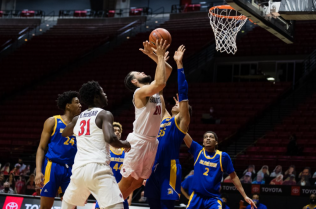 Schakel led all scorers, hitting four 3-pointers and making all nine of his free throw attempts. In addition to his career-high in points, Tomaic set career-bests in free throws (8) and free throw attempts (10) and equaled his season-high with seven rebounds.

Nathan Mensah had 12 points and nine rebounds for the Aztecs (14-4, 8-3 Mountain West), who won their fifth straight game. Trey Pulliam scored 10 points with five assists and Keshad Johnson grabbed a career-high 13 rebounds and added eight points.
With SDSU up 27-24 and 6:51 to play in the first half, Schakel knocked down two free throws to ignite a 20-to-5 run to close out the first 20 minutes and sent the team to the locker room with the Aztecs up 47-29.
San Diego State came out of halftime and didn't miss a beat. They opened the second half with a 12-to-2 run to essentially put the game out of reach. When the run was over it had covered 10:58 and SDSU had outscored San Jose State 32-to-7.
The Aztecs pushed its advantage to as may as 35 points before earning the 31-point, 85-54 victory.
San Diego State outrebounded SJSU 54-30, including 26-7 on the offensive glass which they used to outscore the Spartans 16-4 in second chance points. In its last five games, San Diego State had outrebounded its opponent by an average of 19.2 boards per game and in the same timeframe has outscored the opposition by an average of 31.4 points per game.
Jalen Dalcourt had 13 points for the Spartans (5-12, 3-10 Mountain West). Trey Smith added 12 and reigning Mountain West Player of the Week, Ralph Agee was limited to seven points and five rebounds.
The teams complete their two-game series on Wednesday night in Viejas Arena. Tip is set for 8 p.m. and the game will be broadcast on CBS Sports Network.
Box
Postgame notes