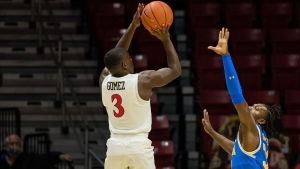 SDSU had four players in double-digits, led by Jordan Schakel, who posted game-highs of 16 points and four steals, while Terrell Gomez followed closely with 13 points, including 3-for-5 clip from beyond the arc. Gomez has 300 three-pointers for his career, which ranks second in the nation among active players.
Freshman Keith Dinwiddie Jr. finished with a career-high 12 points on four threes of his own and Matt Mitchell reached double figures for the 59th time in a Scarlet and Black uniform with 10 points.
SDSU outscored the undersized Firebirds by 16 points in the paint (26-10) as well as 11 points on the fast-break (15-4) to help key the victory. In addition, the Aztecs tallied 26 points on 17 Firebird turnovers and maintained a 40-35 edge in rebounds, including a 36-27 edge on the defensive glass. The Aztecs bench finished with 29 points, marking the third time in as many games this season the bench has scored more than 20 points in a game.
Individually, Nathan Mensah led all players with seven rebounds, while Joshua Tomaic added six boards in the win.
Both SDSU and USK got off to a  sluggish start, shooting a combined 13.3 percent from the floor (2-15) during the first four minutes and change, with each side making just one field goal.
After a pair of Mitchell free throws, the Firebirds (1-0) hit consecutive threes and forged their biggest lead of the game at 8-4. Shortly thereafter, Dinwiddie answered with the first of his four buckets, while Keshad Johnson followed with a dunk to put San Diego State on top 9-8.
The Firebirds moved back in front 11-9 at the 12:51 mark of the half on a three pointer by Jesus Hernandez Jr. However, less than a minute later, Johnson converted an old-fashioned three-point play, sparking the Aztecs' 39-2 outburst
Schakel scored seven points during the run, including five free throws, while Mensah added four to help give SDSU a 28-11 cushion by the 7:27 mark.
St. Katherine was held to just five more points in the half, and the Aztecs held a 48-16 advantage at intermission.
SDSU continued to pad its lead in the second half, fashioning its biggest advantage of the evening at 79-30 after a three-pointer by Mitchell with 6:42 remaining.
After opening with a 1-for-8 pace from the floor, the Aztecs connected on 26 of their final 48 shots, finishing with a .482 field-goal percentage for the evening.
The Firebirds  were led by Hernandez's 12 points, all from three-point range.
San Diego State returns to action on Sunday, Dec. 6, when it hosts Pepperdine. Tipoff is scheduled for 1:30 p.m. PT, and the contest will be aired locally on YurView (Channel 4 on Spectrum and Cox cable systems). The Aztecs and Waves have not met since the 1994-95 campaign.
Box
Postgame notes