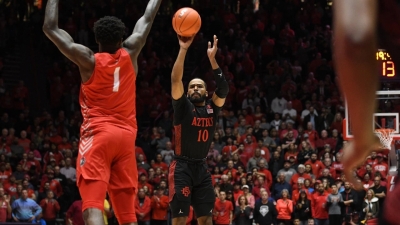 San Diego State made seven of its first nine shots, including three 3-pointers, to blow the game open early. The Lobos missed their first seven shots and also turned it over twice in that span. The lead never dropped below 12 points thereafter.
New Mexico, which lost at home for the first time this season, was missing four starters from the beginning of the season – two to suspensions, one because he was dismissed and another for an injury.
The latest was leading scorer JaQuan Lyle, who already had just missed two games because of an injury. He was suspended Wednesday for two games after he was host to a party Saturday in which two people were shot, suffering non-life-threatening wounds.
BIG PICTURE
With the easy win, the Aztecs retained their large conference lead as every other team has at least three losses. It is the team's longest undefeated streak to start a season and is San Diego State's 11th road/neutral-court win of the season.
UP NEXT
The Aztecs are home Feb. 1 to play Utah State.
Box
Postgame notes